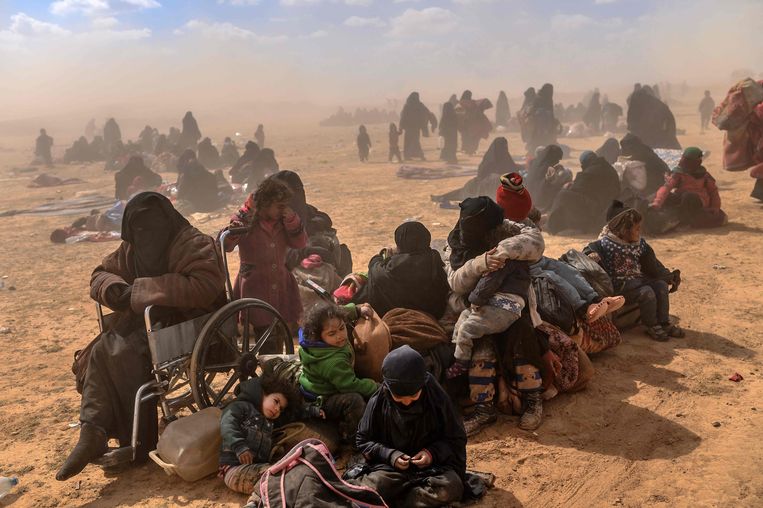 'Blood up to your knees': defeated IS jihadists still defiant

Defeated but unrepentant, some jihadists limping out of their besieged final bastion in eastern Syria still praise the Islamic State and promise bloody vengeance against its enemies.

The skeletal and dishevelled figures shuffling out of the smouldering ashes of the "caliphate" may look like a procession of zombies, but their devotion seems intact.

At an outpost for US-backed forces outside the besieged village of Baghouz, 10 women stand in front of journalists, pointing their index fingers to the sky in a gesture used by IS supporters to proclaim the oneness of God.

They shout in unison: "The Islamic State is here to stay!"

Most refuse to disclose their names or nationalities.

Indistinguishable under their identical black robes, a group of women arriving at the screening point manned by the Syrian Democratic Forces swarm around reporters like hornets.

Some throw rocks at the cameras of those trying to film them, while one screams at a photographer and calls him a pig.

Another grabs the uncovered hair of a female reporter, saying: "Have you not read the Koran, are you not ashamed?"

A third woman snarks at the way the reporter is dressed: "God curses women who resemble men".

The SDF are closing in on diehard jihadists and their relatives holed up in a makeshift encampment inside the village of Baghouz.

More than 7,000 people have fled the bombed-out bastion over the past three days, escaping shelling by the SDF and air strikes by the US-led coalition against IS.

- Cubs of the caliphate -

But for Umm Mohammed, a 47-year-old woman from Iraq's Anbar province, the men who have fled are "the cowards and the meek".

As for the women, "we left because we are a heavy burden on the men", she says.

"We are waiting for the (next) conquest, God willing."

Nearby, a little boy hums a jihadist anthem as he walks beside his mother, his jacket covered with dust.

The so-called "cubs of the caliphate" -- boys raised under IS rule and trained to fight from a young age -- are the reason the group will survive, another Iraqi woman says.

"The caliphate will not end, because it has been ingrained in the hearts and brains of the newborns and the little ones," says the 60-year-old, refusing to give her name.

Many women tell AFP that they want to raise their children on the ideology of the caliphate, even as its territorial presence fizzles out.

"There was an implementation of God's law, but there was injustice," he says, claiming he worked as an accountant for IS.

"The leaders stole money... and fled," he says. "We stayed until the bullets flew over our heads."

The 30-year-old with white hair prays for the "caliphate" and wishes IS "many conquests" to come.

But he says many senior IS figures have fled to the northwestern province of Idlib or crossed into Turkey and Iraq.

Najiyya's harshest words are for the group's elusive leader, Abu Bakr al-Baghdadi, whom he says he never saw once.

"He left us in the hands of people who let us down and left," he says. "He bears responsibility, because, in our view, he is our guide".

When asked why it took him so long to quit the redoubt, Najiyya said he was afraid of being detained by the SDF because his cousins are IS fighters.

He also says that rumours the jihadists would be granted safe passage to Idlib, largely controlled by a rival jihadist group, encouraged some to stay.

Nearby, a bearded man with a leg wound cursed the coalition, whose warplanes have pummelled the last jihadist redoubt.

"I only surrendered because of my injury," he says. "I have been with IS since the beginning."

One woman, who says she is from Damascus, tells AFP: "We have left, but there will be new conquests in the future".

Speaking from behind a veil that covers her face, she says: "We will seek vengeance, there will be blood up to your knees."

Thousands of men, women and children, many of them wounded, have fled Baghouz in recent days


Hungary: Muslim “refugee” discovered to have beheaded 20 people for the Islamic State

He was ordered expelled from Hungary after being caught with forged documents on December 30, but he was detained on Friday, so clearly he didn’t leave after he was expelled. Also he seems to have moved freely around Europe for quite some time. His story is evidence that European authorities are overwhelmed and cannot deal adequately with the Muslim migrant crisis they have inflicted upon themselves.