In another end-run around Congress, President Obama has unilaterally eased immigration requirements for foreigners linked to terrorism.

He ordered the State Department and Homeland Security to ignore a post-9/11 law barring entry to those giving political or charitable aid to Hamas and other known terrorist groups.

Treasonous as it sounds, the president is following through on a little-noticed overture he made to Muslims in his Cairo speech of 2009, when he suggested he'd relax enforcement of material support laws involving "zakat," or Islamic charitable giving.

He basically apologized for the Bush administration's locking up the founders of the largest Muslim charity in America for sending millions to "zakat committees" linked to Hamas.

Of course, his move weakens, yet again, America's security. By exempting five kinds of limited material support for terrorism, Obama instantly purges more than 4,000 suspects from the U.S. terror watch list and opens our borders up to both them and their families.

Not to worry, Homeland Security says, it'll run additional security checks before letting them in.

Oh? Like the checks run on the Tsarnaev family, who also got into the country on asylum claims? Those security checks?

Forgive the survivors and the families of those who died in the Boston bombings if they're not reassured.

Taking a chance on foreign nationals already suspected of aiding and abetting terrorists only puts Americans at greater risk. Yet the president is ordering immigration authorities to ignore red flags.

He suggests too many innocent Muslims seeking a better life here, including Palestinian "refugees," have been "unfairly" excluded by Draconian post-9/11 immigration laws. Says who? Islamist lobbyist groups, such as the Council on American-Islamic Relations, who claim Palestinian terrorists are "freedom fighters"?

At the same time Obama opens the floodgates to them, he's closing our borders to Christians fleeing persecution by Muslims in Egypt, Iraq and other Mideast countries.

Displaced Palestinians have plenty of places they can resettle in the Mideast.

The options for Christians, on the other hand, are limited. The U.S. may be their best chance for refuge from violence and for religious freedom.

Yet the State Department has rejected virtually all of the 20,000 asylum applications from Coptic Christians trying to escape Egypt since the toppling of its pro-American regime.

Meanwhile, it's welcoming terrorist supporters pushed out by Cairo's renewed military crackdown on the Brotherhood.

Thanks to Obama's new rule, these escaping Islamist troublemakers will be able to set up shop inside America and practice their jihadism with virtual impunity.

If the president doesn't like rampant rumors he's a "secret Muslim," or that he's doing the bidding of his Muslim Brotherhood-tied brother Malik, he should stop making sympathetic gestures that feed them.

Islamic persecution of the Jews dates back centuries

There are many things about Barack Obama’s presidency that have left a bad taste in America’s mouth. We can add another one to the list; namely, his astonishing lack of understanding about the history of Muslim anti-Semitism.

In a recent interview with The New Yorker’s David Remnick, Mr. Obama pontificated that “the interests of Israel in stability and security are actually very closely aligned with the interests of the Sunni states.” To call this a completely inaccurate assessment would be an understatement.

It didn’t stop there, however.

The unlikely professor of Middle East history, secretly disguised as a mild-mannered leader of the free world, also said: “What’s preventing them from entering into even an informal alliance with at least normalized diplomatic relations is not that their interests are profoundly in conflict, but the Palestinian issue, as well as a long history of anti-Semitism that’s developed over the course of decades there, and anti-Arab sentiment that’s increased inside of Israel based on seeing buses being blown up. If you can start unwinding some of that, that creates a new equilibrium.”

Mr. Obama is claiming Muslim anti-Semitism is only a few decades old at best.

This statement is so baffling that it’s hard to know where to start. Clearly, he hasn’t read a great deal on this topic. If Mr. Obama had ever delved into the work of pre-eminent historians such as Will Durant, Paul Johnson and Bernard Lewis, he would quickly discover that his knowledge of this important topic was severely lacking.

The history of Muslim anti-Semitism goes back many centuries. Mr. Durant wrote in “The Age of Faith” (1950), the fourth volume of his impressive series “The Story of Civilization,” that the “Moslems, living by Mohammed, resented the Jewish rejection of their prophet.”

Moreover, the tradition of Jews and Saracens wearing a “distinctive color” on their clothing in Christian Europe “was in part a retaliation against older and similar laws of Moslems against Christians and Jews.”

Meanwhile, Mr. Johnson noted in “A History of the Jews” (1987) that when it came to Islamic rule in the 12th and 13th centuries, “Always, in the background, there was the menace of anti-Semitism.” The historian pinpoints the “worst actual persecution occurred under the fanatical or mad Fatimid caliph al-Hakim, early in the eleventh century, who turned first on the Christians, then on the Jews.”

Another “zealot-ruler was Saladin’s nephew al-Malik, who called himself the caliph of the Yemen (1196-1201).” Mr. Johnson mentions “a letter of August 1198 from the Yemen relates how the Jews were summoned to the ruler’s audience hall and forcibly converted: ‘Thus all apostacized. Some of the pious, who [then] defected from Islam, were beheaded.’”

In the author’s view, “Parts of Islam were much worse than others for Jews. Morocco was fanatical. So was northern Syria. Anti-dhimmi regulations, such as sumptuary laws, were often strictly enforced to gouge a financial settlement out of the Jewish community.”

While “Jews in traditional Islamic societies experienced the normal constraints and occasional hazards of minority status … they were better off under Muslim than under Christian rule, until the rise and spread of Western tolerance in the seventeenth and eighteenth centuries … . [W]here hostile stereotypes of the Jew existed in the Islamic tradition, they tended to be contemptuous and dismissive, rather than suspicious and obsessive.”

I would therefore interpret this as a softer version of anti-Semitism — and hardly anything to be proud of.

Mr. Lewis thinks existing Muslim anti-Semitism increased after the state of Israel was founded in 1948. “As some writers at the time observed,” he put it, “it was bad enough to be defeated by the great imperial powers of the West; to suffer the same fate at the hands of a contemptible gang of Jews was an intolerable humiliation. Anti-Semitism and its demonized picture of the Jew as a scheming, evil monster provided a soothing answer.”

Some observers may argue my criticism of Mr. Obama’s New Yorker interview is simply a matter of semantics. Yet it’s much more than that. We must expect better of our political leaders, and they have to understand the extensive history of a particular region to potentially have a significant impact.

Mr. Obama doesn’t seem to realize Muslim anti-Semitism has a long, sordid past. Rather, he appears to think it’s a decades-old phenomenon. This may shed further light on why he’s been such an extraordinarily weak leader on foreign-policy matters.

Michael Taube is a contributor to The Washington Times. 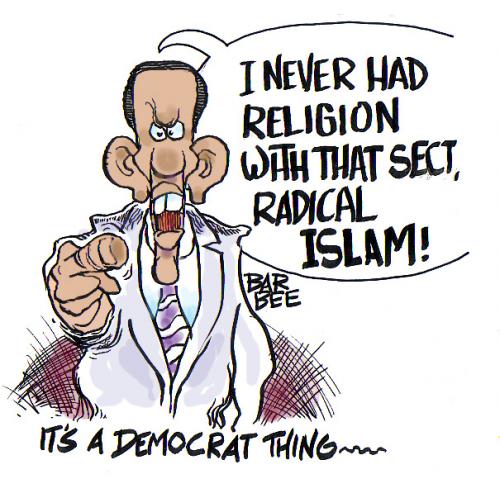 
When President Obama becomes the first U.S. president to visit Malaysia in almost half a century, he will visit a prominent mosque on Sunday – but not a church, in a country where relations between the Muslim establishment and minority Christians have not always been smooth.

The State Department’s evaluation of Malaysia’s human rights record identified problem areas including abuses by security forces and restrictions of freedom of the press, speech, assembly, association and religion.

Malaysia has a Muslim majority of some 61 percent, with minorities including Buddhists (almost 20 percent), Christians (9 percent) and Hindus (6 percent.) Concerns highlighted in the State Department’s latest annual religious freedom report include:

--Denial of legal status to some religious groups

--While Islamic religious instruction is compulsory for Muslim children in public schools, non-Muslim students are not allowed to take classes in their religion, but instead must take non-religious morals and ethics courses.

--The government prohibits publications, public events and debates which it says may incite racial or religious disharmony, including public discussions of issues such as religious freedom and apostasy.

The most controversial religious freedom issue in recent years has been a dispute over whether Malay-language Christian publications can use the word “Allah” in referring to God.

The government worries that this will “confuse” Muslims, but the Catholic Church has argued that it had used the word for God in the country for more than four centuries.

A Catholic publication in 2009 risked losing its publication permit over the dispute, but it won a court ruling in its favor, and was allowed to continue to use the word “Allah” in its Malay-language edition. But that was overturned on appeal late last year, with a panel of judges arguing that “such usage, if allowed, would inevitably cause confusion within the community.”

Since then Bibles have been seized in parts of the country for flouting the prohibition.