The demonstration underscored the delicate nature of Obama’s trip to Muslim-majority Malaysia, which will make him the first siting US president to visit in nearly half a century, a period marked by mutual distrust.

The protesters marched to the embassy in Kuala Lumpur from a nearby mosque after Friday afternoon prayers, shouting “God is great” and “Obama is the enemy of the Prophet Muhammad.”

They also bore placards and banners saying: “US is axis of evil” and handed out leaflets saying “Reject Obama, World’s No. 1 Terrorist.”

They dispersed after about 15 minutes. 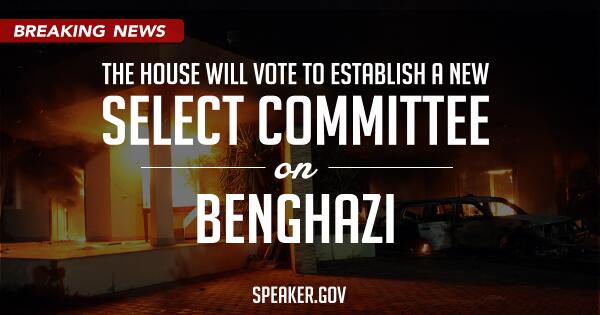 WASHINGTON, DC – House Speaker John Boehner (R-OH) is announcing today that he intends for the House to vote to create a new select committee to investigate the September 11, 2012 terrorist attack in Benghazi, Libya that killed four Americans. He released the following statement:
“Americans learned this week that the Obama Administration is so intent on obstructing the truth about Benghazi that it is even willing to defy subpoenas issued by the standing committees of the People's House. These revelations compel the House to take every possible action to ensure the American people have the truth about the terrorist attack on our consulate that killed four of our countrymen. In light of these new developments, the House will vote to establish a new select committee to investigate the attack, provide the necessary accountability, and ensure justice is finally served.
“The administration's withholding of documents – emails showing greater White House involvement in misleading the American people – is a flagrant violation of trust and undermines the basic principles of oversight upon which our system of government is built. And it forces us to ask the question, what else about Benghazi is the Obama administration still hiding from the American people?
“The House committees that have been investigating this attack have done extraordinary work, using their subpoena power, holding dozens of hearings, and conducting hundreds of interviews. Without this work we would not know much that we do today. But it’s clear that questions remain, and the administration still does not respect the authority of Congress to provide proper oversight. This dismissiveness and evasion requires us to elevate the investigation to a new level. I intend for this select committee to have robust authority, and I will expect it to work quickly to get answers for the American people and the families of the victims.
“Four Americans died at the hands of terrorists nearly 20 months ago, and we are still missing answers, accountability, and justice. It’s time that change.”

North Korea insults Obama with racist barbs, South Korea's Park with sexist ones
"Divine punishment to the world's one and only delinquent Obama,"
"You can also tell this by his appearance and behavior, and while it may be because he is a crossbreed, one cannot help thinking the more one sees him that he has escaped from a monkey's body,"

BARACK OBAMA SHOULD BE IMPEACHED. CLICK HERE IF YOU AGREE: door silkyboxershortXL
Afterburner, Bill Whittle;
Not one of us

door Ariel
Is he one of us?

Last month, President Barack Obama chose to support and fund a Palestinian Authority (PA) government that includes Hamas, a U.S. and EU-designated terrorist group that calls in its charter for the destruction of Israel (Article 15) and the murder of Jews (Article 7). Also last month, Obama freed five senior Taliban terrorist commanders in exchange for an American serviceman who may have been a deserter.

Obama could have cut funding to the PA, which would have made sense strategically, and could have supported a close, long-standing American ally, Israel. He could have refused any exchange of senior Taliban leaders. Why didn’t he?

Because he supports engagement with radical Islam – not merely moderate Muslims, Arab liberals, or secular reformers. Al-Qaeda notwithstanding, Obama believes radical Muslims are potential allies and friends. This is confirmed by his decisions at every important point in his presidency.

Thus, when Obama addressed the Muslim world in Cairo in June 2009, he insisted on inviting members of the parliamentary bloc of the (then-banned) radical Muslim Brotherhood over the objections of U.S. ally, Egyptian president Hosni Mubarak – though the Obama administration later denied that it did so. (A furious Mubarak refused to attend.)

It was no secret that numerous surveys had shown before 2011 that large majorities of Egyptians favor discriminatory sharia, the death penalty for apostates and so on – meaning that it was almost certain that radical Muslims would triumph in elections. Yet, when a groundswell of opposition to Mubarak’s rule arose in February 2011, Obama called for Mubarak to step down “now” while his spokesman called for early elections involving “non-secular actors.”

When the Brotherhood’s Mohamed Morsi was, unsurprisingly, elected president, Obama did not discontinue arming the regime, even though its future policies were as yet entirely unknown. Yet, when in July 2013, Morsi was ousted by the Egyptian military under Field Marshal Abdul el-Sisi, Obama suspended military aid.

The Iranian regime is one whose leaders have called for the destruction of both America and Israel. Tehran has been developing a nuclear weapons capacity that would give it the means to act on these designs. Yet, Obama has not sought to undermine or replace the regime. In 2009, when Iranians were brutalized on Tehran’s streets for protesting the rigged re-election of President Mahmoud Ahmadinejad, Obama did not call for Ahmadinejad to step down – he pointedly refused to get involved, saying “it’s not productive, given the history of U.S.-Iranian relations, to be seen as meddling.”

For over a year upon becoming President, Obama prevented any new congressional sanctions on Iran coming to a vote. He subsequently diluted and delayed those that in the end passed. The 2010 UN Security Council sanctions Obama did support did not cover Iran’s vital oil, financial, and insurance sectors, and included huge exemptions for numerous countries like China, which has huge contracts in Iran’s energy sector developing oil refineries, and Russia, which supplies S-300 surface-to-air missiles to Iran.

Then, in 2013, having at least tightened UN sanctions, Obama agreed to immediately undo them, granting Iran some $20 billion in sanctions relief (not merely $6-7 billion, as the Administration initially claimed) under the terms of the Geneva interim agreement. That agreement permitted Iran to retain intact all the essential elements of its nuclear weapons program – its Arak plutonium plant; continued uranium enrichment; intercontinental ballistic missile (ICBM) programs, even retention of its enriched uranium stocks. (Iran was simply required to reduce them to an oxide which can be restored in weeks to weapons-grade uranium.)

The conclusion is clear: Obama, contrary to his oft-repeated promise to do “everything, everything” to prevent Iran going nuclear, is willing to let Tehran become the next nuclear power. That’s why in July 2009, then-Secretary of State Hillary Clinton said that the U.S. would extend a “missile shield” over the Middle East if that occurred. It also explains why Obama in 2013 nominated as Defense Secretary Chuck Hagel, an outspoken opponent of stopping Iran by military or even economic means.

In Syria, Obama is arming the opposition to Bashar Assad’s Baathist regime. It might indeed be welcome if Assad fell, but some 80% of the forces fighting him are Islamists, including al-Qaeda. Where will that leave Syria and the region should Islamists succeed in replacing Assad?

Turkey long ceased to be a close U.S. ally. In June 2010, it opposed U.S-supported UN sanctions on Iran. In 2012, it excluded Israel from two counter-terrorism conferences in Istanbul, and Madrid. Its Islamist Prime Minister, Recep Tayyip Erdogan, has called Israel a “terrorist state” and Zionism “a crime against humanity.” He has also a record of anti-Semitism that goes back to the 1970s. Yet, by Obama’s own admission, Erdogan is one of Obama’s closest friends among foreign leaders.

Now, having chosen not to penalize Mahmoud Abbas’ Fatah/Palestinian Authority for forming a unity regime with Hamas, a package of $440 million in U.S. aid to the PA is set to proceed, even though we now know that Hamas members kidnapped and murdered three Israeli teenagers.

The record shows that Obama favors accommodation with radical Islam, their regimes and their leaders. He has less interest in traditional U.S. allies and is willing to pick fights with them or abandon them.