Billionaire entrepreneur Elon Musk called the July 1969 Apollo 11 mission to land a man on the moon "probably the most inspiring thing in history. It certainly inspired me. I'm not sure that SpaceX would exist if not for Apollo 11."

Still, Musk, the CEO and lead designer of SpaceX (which he founded in 2002), said he expected the United States to have a base on the moon by now, and to have sent people to Mars. But no astronaut has set foot on the lunar surface since 1972, and the extent of Mars exploration to date has been some unmanned rovers and orbiters.

In an interview to be broadcast on "CBS Sunday Morning" July 21, Musk talks with contributor Jeffrey Kluger, the co-author of "Apollo 13", about the future of space exploration.

The first private company to launch, orbit and recover a spacecraft, SpaceX (which is short for Space Exploration Technologies) is one of the companies that delivers cargo to the International Space Station. In addition to Musk, fellow billionaires Richard Branson and Amazon's Jeff Bezos are in the space race. Branson hopes to offer commercial space flights to tourists through his Virgin Galactic, while Bezos, through his company Blue Origin, wants to create colonies on the moon.

Musk is thinking bigger, and perhaps faster: "Well, this is gonna sound pretty crazy … with an un-crewed vehicle, I believe we could land on the moon in two years," he told Kluger.

"Sending crews to Mars in four years, I think that, that sounds pretty doable," Musk said. "Like, internally, we would aim for two years, and then reality might be four." “What about the concept of Mars direct?”

On Friday, President Trump commemorated the 50th anniversary of Apollo 11 with a photo opportunity in the Oval Office, where he spent a lot of time questioning his administration’s own policy for deep space human exploration. Surrounded by NASA officials, Moon walkers, and lawmakers, Trump repeatedly asked NASA’s administrator, Jim Bridenstine, why astronauts couldn’t go straight to Mars instead of going to the Moon first.

“To get to Mars, you have to land on the Moon, they say,” Trump asked Bridenstine, according to a recording provided by Politico. “Any way of going directly without landing on the Moon? Is that a possibility?”

Bridenstine, who was standing to the right of the president in the Oval Office, replied that the Moon is a “proving ground” for going to Mars, allowing NASA to test out technologies needed for keeping people alive for extended periods of time on the Red Planet. “When we go to Mars we’re going to have to be there for a long period of time, so we need to learn how to live and work on another world,” said Bridenstine.

The Trump administration’s stated goal for deep space human exploration is to go to the Moon. The very first space policy directive that Trump signed in December of 2017 was to send people back to the Moon to establish a sustainable presence there. “Beginning with missions beyond low-Earth orbit, the United States will lead the return of humans to the Moon for long-term exploration and utilization, followed by human missions to Mars and other destinations,” the directive states.

Since then, NASA has been ratcheting up its plans for a human lunar return. In April, Vice President Mike Pence challenged NASA with sending humans back to the Moon by 2024, instead of 2028 like the agency had planned. NASA has since formed a program to meet this ambitious deadline called Artemis, which aims to send the first woman to the lunar surface and create a sustainable outpost near the Moon. In May, the Trump administration requested an additional $1.6 billion for NASA next year to jumpstart the Artemis program.

But as NASA has scrambled to meet Pence’s call, Trump has become more vocal about his love for Mars in recent months. On June 7th, Trump tweeted that “NASA should NOT be talking about going to the Moon,” arguing we had already been there 50 years ago. “They should be focused on the much bigger things we are doing, including Mars (of which the Moon is a part), Defense and Science!,” he wrote. At the time, the tweet created a lot of confusion given the administration’s love for the Moon. But Bridenstine has repeatedly claimed since then that the Artemis program is staying the same.

Trump made his interest in Mars much clearer today, asking Bridenstine to explain NASA’s Moon plans and why they were necessary. He asked Apollo 11 astronaut Michael Collins his thoughts, to which Collins replied, “Mars direct,” indicating NASA should go straight to Mars and bypass the Moon altogether. “It seems to me Mars direct,” Tump replied. “I mean, who knows better than these people. They’ve been doing this stuff for a long time. What about the concept of Mars direct?”

Bridenstine explained: “The challenge is if we go direct to Mars, there’s going to be a lot of things that we haven’t yet proven out.” Bridenstine went on to explain that the lunar surface contains water ice that could be mined and turned into rocket fuel, and NASA needs to practice using resources like this on other worlds.

“So you feel that really landing on the Moon first and figuring it out and getting ready to launch — and you would like to, you really feel launching, you’re essentially launching from the Moon to Mars?” Trump asked.

“The best way to think about it is we learn how to live and work on the Moon, but we launch to Mars from a space station that we have in orbit around the Moon — a space station we call Gateway,” Bridenstine replied. Indeed, NASA has been planning to create a new space station in lunar orbit called the Gateway, an outpost for astronauts to travel to and from the surface of the Moon.

While NASA’s Artemis program is more or less intact, Bridenstine and the space agency have become much more vocal about Mars since Trump’s tweet. The administrator has made it increasingly clear that the ultimate goal of going to the Moon is to get to Mars. He also told The Verge last week that NASA would be releasing a Mars plan in the coming months. On Thursday, Elon Musk revisited his 2015 suggestion to terraform Mars by nuking the hell out of its poles.

Even then, the idea was scientifically questionable — research found that Musk's plan would only increase Mars' atmospheric pressure to seven percent of Earth's. Now, mathematician Robert Walker calculates on the blog Science 2.0 that if we wanted to make Mars habitable though nuclear explosions, we would need to send what amounts to an assembly line of bombs up to the Red Planet and detonate 3,500 of them every single day for about seven weeks — bad news for Musk's ambitious terraforming plans.

Big Boom
Walker based his argument on Musk's clarification that he wanted to create "mini suns" near Mars' ice caps through sustained nuclear explosions. As Walker writes, the brightest part of a nuclear explosion lasts roughly 50 seconds.

If we were to try and melt Mars' ice caps with nuclear bomb-based artificial suns, that would mean building, launching, and detonating 1,728 bombs per pole every day, without fail, for a total of 3,456 bombs. For perspective, that's nearly twice as many bombs as the U.S. currently has in its entire arsenal.

And that's without getting into another little problem: the process would probably turn Mars into an inhabitable nuclear wasteland due to all the radiation it'd kick up.

The main practical limit to the use of a gravity assist maneuver is that planets and other large masses are seldom in the right places to enable a voyage to a particular destination. 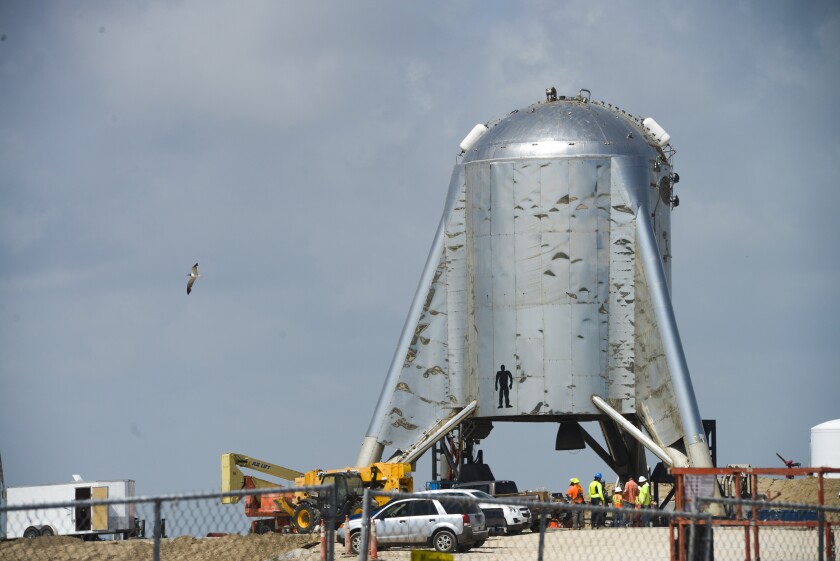 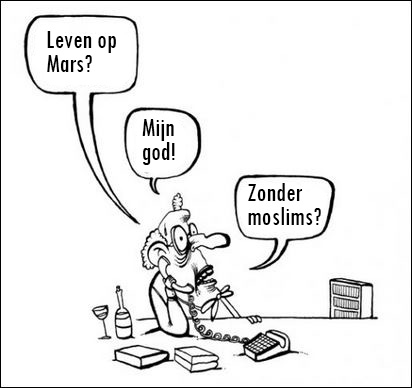 Starship could attempt to make its first voyage to the Red Planet as soon as 2022.

We may not yet know how to get to Mars exactly, but — as to be expected from a company led by Elon Musk — SpaceX is already several steps ahead.

The private space company has leveraged images from NASA’s Mars Reconnaissance Orbiter, an imaging satellite that’s currently orbiting Mars, to determine a landing site for its in-development Starship spacecraft — despite the fact that the 180-foot spacecraft’s maiden voyage is still years out.

Images labelled "Candidate Landing Site for SpaceX #Starship in Arcadia Region" were found in latest data release from @HiRISE. It means @SpaceX is already quietly evaluating best place where to land first Starships on #Mars. We made a map of those sites: https://www.humanmars.net/2019/09/candi ... rship.html 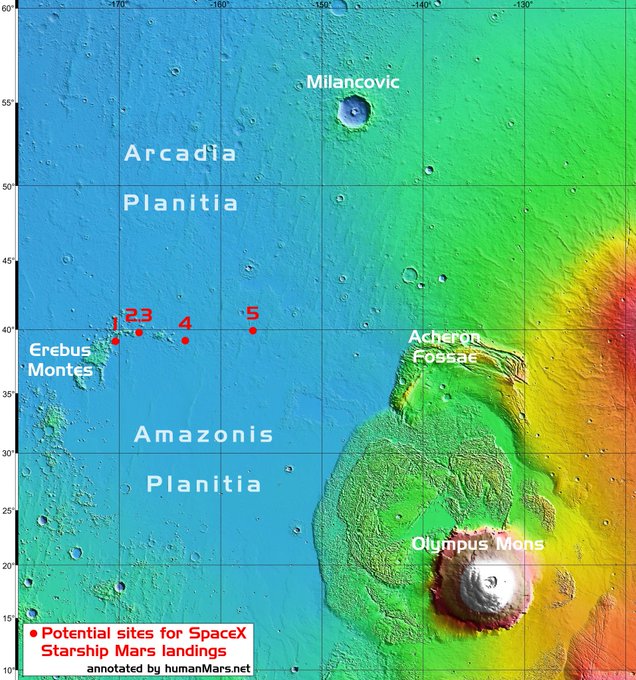 Space historian Robert Zimmerman came across images, with the labels “Candidate Landing Site for SpaceX Starship,” in data from the NASA orbiter.

The images of the Martian surface were taken by a high-res camera system called HiRISE onboard the orbiter, and uploaded to the University of Arizona’s website, the institution responsible for operating the camera.

SpaceX’s search for a landing site dates back to 2017, according to Teslarati. Over the past two years, the company has narrowed its search to a massive plains region called Arcadia Planitia. Five of the six potential landing sites shown in the new images are inside this zone.

Previous research suggests that the plains could be covered in abundant amounts of shallow ice at low altitudes. Not only could it provide access to water for subsistence and rocket fuel for a return to Earth, but the plains would be comparatively easy to land in thanks to the lack of geographical obstacles such as large rocks or mountains.

The plains’ latitude also means that the Arcadia Planitia is warmer, with a milder climate than other regions of Mars. Low altitude also means slightly elevated air pressure, which could act as a protective barrier against harsh radiation.

So when will Starship attempt its epic voyage? According to SpaceX CEO Elon Musk, Starship will attempt its first orbital mission as early as 2020 — and head to Mars as soon as 2022.

But the company has a gargantuan task ahead of it. A much smaller, scaled-down version of its mammoth Starship spacecraft made its first untethered flight only in July. And according to Musk, a test vehicle twice as big is already in the plans.

More on Starship: Elon Musk: “Next Gen” Craft Could Be Twice the Size of Starship 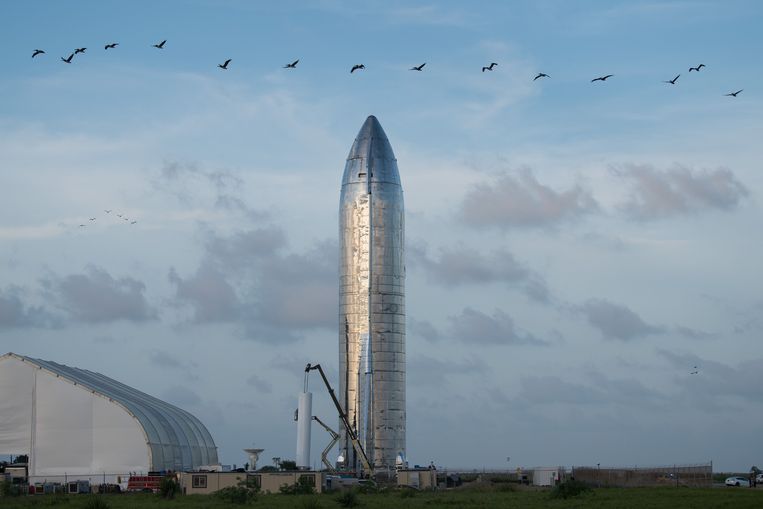