Now the Pentagon tells Bush: climate change will destroy us

Climate change over the next 20 years could result in a global catastrophe costing millions of lives in wars and natural disasters..

A secret report, suppressed by US defence chiefs and obtained by The Observer, warns that major European cities will be sunk beneath rising seas as Britain is plunged into a 'Siberian' climate by 2020. Nuclear conflict, mega-droughts, famine and widespread rioting will erupt across the world.

The document predicts that abrupt climate change could bring the planet to the edge of anarchy as countries develop a nuclear threat to defend and secure dwindling food, water and energy supplies. The threat to global stability vastly eclipses that of terrorism, say the few experts privy to its contents.

'Disruption and conflict will be endemic features of life,' concludes the Pentagon analysis. 'Once again, warfare would define human life.'

The findings will prove humiliating to the Bush administration, which has repeatedly denied that climate change even exists. Experts said that they will also make unsettling reading for a President who has insisted national defence is a priority.

The report was commissioned by influential Pentagon defence adviser Andrew Marshall, who has held considerable sway on US military thinking over the past three decades. He was the man behind a sweeping recent review aimed at transforming the American military under Defence Secretary Donald Rumsfeld.

Climate change 'should be elevated beyond a scientific debate to a US national security concern', say the authors, Peter Schwartz, CIA consultant and former head of planning at Royal Dutch/Shell Group, and Doug Randall of the California-based Global Business Network.

An imminent scenario of catastrophic climate change is 'plausible and would challenge United States national security in ways that should be considered immediately', they conclude. As early as next year widespread flooding by a rise in sea levels will create major upheaval for millions.

Last week the Bush administration came under heavy fire from a large body of respected scientists who claimed that it cherry-picked science to suit its policy agenda and suppressed studies that it did not like. Jeremy Symons, a former whistleblower at the Environmental Protection Agency (EPA), said that suppression of the report for four months was a further example of the White House trying to bury the threat of climate change.

Senior climatologists, however, believe that their verdicts could prove the catalyst in forcing Bush to accept climate change as a real and happening phenomenon. They also hope it will convince the United States to sign up to global treaties to reduce the rate of climatic change.

A group of eminent UK scientists recently visited the White House to voice their fears over global warming, part of an intensifying drive to get the US to treat the issue seriously. Sources have told The Observer that American officials appeared extremely sensitive about the issue when faced with complaints that America's public stance appeared increasingly out of touch.

One even alleged that the White House had written to complain about some of the comments attributed to Professor Sir David King, Tony Blair's chief scientific adviser, after he branded the President's position on the issue as indefensible.

Among those scientists present at the White House talks were Professor John Schellnhuber, former chief environmental adviser to the German government and head of the UK's leading group of climate scientists at the Tyndall Centre for Climate Change Research. He said that the Pentagon's internal fears should prove the 'tipping point' in persuading Bush to accept climatic change.

Sir John Houghton, former chief executive of the Meteorological Office - and the first senior figure to liken the threat of climate change to that of terrorism - said: 'If the Pentagon is sending out that sort of message, then this is an important document indeed.'

Bob Watson, chief scientist for the World Bank and former chair of the Intergovernmental Panel on Climate Change, added that the Pentagon's dire warnings could no longer be ignored.

'Can Bush ignore the Pentagon? It's going be hard to blow off this sort of document. Its hugely embarrassing. After all, Bush's single highest priority is national defence. The Pentagon is no wacko, liberal group, generally speaking it is conservative. If climate change is a threat to national security and the economy, then he has to act. There are two groups the Bush Administration tend to listen to, the oil lobby and the Pentagon,' added Watson.

'You've got a President who says global warming is a hoax, and across the Potomac river you've got a Pentagon preparing for climate wars. It's pretty scary when Bush starts to ignore his own government on this issue,' said Rob Gueterbock of Greenpeace.

Already, according to Randall and Schwartz, the planet is carrying a higher population than it can sustain. By 2020 'catastrophic' shortages of water and energy supply will become increasingly harder to overcome, plunging the planet into war. They warn that 8,200 years ago climatic conditions brought widespread crop failure, famine, disease and mass migration of populations that could soon be repeated.

Randall told The Observer that the potential ramifications of rapid climate change would create global chaos. 'This is depressing stuff,' he said. 'It is a national security threat that is unique because there is no enemy to point your guns at and we have no control over the threat.'

Randall added that it was already possibly too late to prevent a disaster happening. 'We don't know exactly where we are in the process. It could start tomorrow and we would not know for another five years,' he said.

'The consequences for some nations of the climate change are unbelievable. It seems obvious that cutting the use of fossil fuels would be worthwhile.'

So dramatic are the report's scenarios, Watson said, that they may prove vital in the US elections. Democratic frontrunner John Kerry is known to accept climate change as a real problem. Scientists disillusioned with Bush's stance are threatening to make sure Kerry uses the Pentagon report in his campaign.

The fact that Marshall is behind its scathing findings will aid Kerry's cause. Marshall, 82, is a Pentagon legend who heads a secretive think-tank dedicated to weighing risks to national security called the Office of Net Assessment. Dubbed 'Yoda' by Pentagon insiders who respect his vast experience, he is credited with being behind the Department of Defence's push on ballistic-missile defence.

Symons, who left the EPA in protest at political interference, said that the suppression of the report was a further instance of the White House trying to bury evidence of climate change. 'It is yet another example of why this government should stop burying its head in the sand on this issue.' 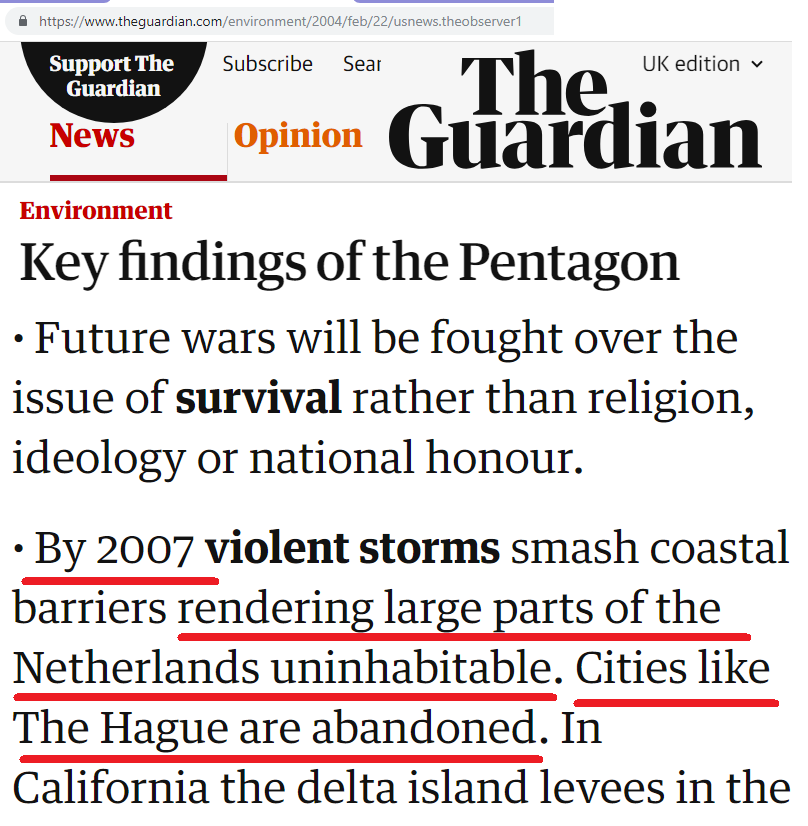 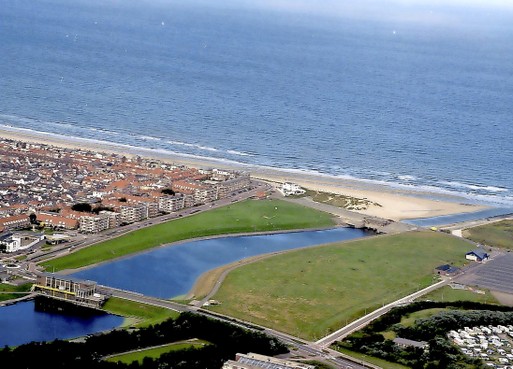