Calls for Jeff Sessions to resign over his alleged communications with Russia have kept keyboards busy as social media users question whether an Attorney General can investigate himself.

Sessions is accused of lying during his confirmation hearing when he told Senator Al Franken that he did not have communications with Russian officials during Donald Trump’s election campaign. Sources, allegedly from the Justice Department, told the Washington Post, that Sessions spoke to Russian Ambassador to the US Sergey Kislyak twice last year, contradicting his statement.

President Trump’s claims that the Obama administration sought to undermine his presidency received some support on Wednesday from a New York Times report on the Obama White House’s activities in the weeks before the inauguration.

According to The Times, Obama White House officials waged a campaign to procure, save and disperse classified intelligence regarding Trump associates’ contacts with Russians.

The campaign also involved curtailing the Trump team’s access to highly classified information and of lowering classification ratings on other information about the ongoing Russia investigation so that it could be more widely shared across the government.

According to The Times’ sources, the Obama officials waged the campaign out of fear that the Trump administration would cover up or destroy some of the information.

The campaign was multifaceted but was not directed by Obama himself, the Times sources claimed.

The wide-ranging report also includes some information that is not positive for Trump, including that federal investigators were given intelligence from foreign services that some Trump associates met with Russians in the Netherlands and Britain.

That detail adds new information to a report from The Times last month that U.S. investigators had evidence that some Trump campaign advisers communicated with Russian government officials before the election.

That report noted that U.S. officials do not yet have evidence of any coordination between Trump advisers and the Russian government to influence the election. The White House strongly denied the claims made in that report, and asserted the FBI deputy director Andrew McCabe told Trump’s chief of staff, Reince Priebus, that the story was “bullshit.”

According to the newspaper, some Obama White House officials asked specific questions in intelligence briefings because they knew the questions and answers would be documented and saved for future review.

Intelligence agencies ramped up efforts to convert raw intelligence gathered on Trump advisers into information that could be used by analysts. The intelligence was also classified at relatively low levels “to ensure as wide a readership as possible across the government,” according to The Times.

The State Department, then led by John Kerry, also took part in the intelligence-sharing campaign. The agency sent a batch of documents classified as “Secret” to Maryland Sen. Ben Cardin, the top Democrat on the Foreign Relations Committee, just before the election.

The Obama officials also moved to cap the number of incoming Trump officials who could view extremely sensitive information, “including the names of sources and the identities of foreigners who were regularly monitored.”

The scheme would seem to lend support to Trump’s claims that the Obama White House sought to undermine his presidency by leaking classified information.

“I think that President Obama is behind it because his people are certainly behind it. And some of the leaks possibly come from that group, which are really serious because they are very bad in terms of national security. But I also understand that is politics. In terms of him being behind things, that’s politics. And it will probably continue,” Trump told Fox & Friends in an interview this week.

Trump has alleged that Obama appointees still working in the government have leaked information about some of his phone calls with foreign leaders and about Michael Flynn, the former Trump national security adviser who resigned last month because of phone calls he had with Russia’s ambassador in December.

The Times report provides new details about the information being reviewed as part of the expansive investigation into Russia’s attempts to influence the election.


Jeff Sessions is an honest man. He did not say anything wrong. He could have stated his response more accurately, but it was clearly not intentional. This whole narrative is a way of saving face for Democrats losing an election that everyone thought they were supposed to win. The Democrats are overplaying their hand. They lost the election, and now they have lost their grip on reality. The real story is all of the illegal leaks of classified and other information. It is a total "witch hunt!" 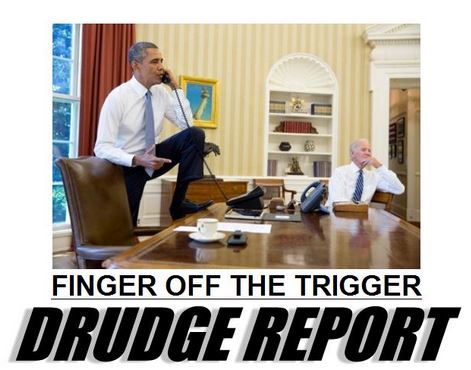 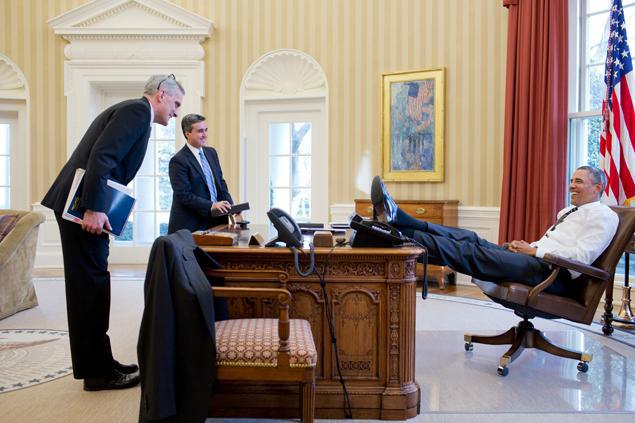 Top Trump aide Sebastian Gorka refuses to say Islam is a religion
Sebastian Gorka, a deputy adviser specializing in terrorism and security issues to President Donald Trump, declined to comment on whether he considers Islam to be a religion on Wednesday.

Gorka, who dodged a basic question on whether Islam qualifies as a religion in a prior interview with NPR, repeated the maneuver in another NPR interview.

"This is not a theological seminary," Gorka said. "This is the White House, and we're not going to get into theological debates."

"If the president has a certain attitude to a certain religion that's something you can ask him, but we're talking about national security and the totalitarian ideologies that drive the groups that threaten America," he added.

Islam is near-universally recognized as a religion outside of a small number of right-wing extremists which believe it is instead a militant political creed bent on worldwide domination.

Gorka has spoken in sweeping terms about Islam before, and his wife and frequent intellectual collaborator Katharine Gorka at one point claimed "Islam's leading ideologues and spokespersons have openly and repeatedly declared ideological war on America." 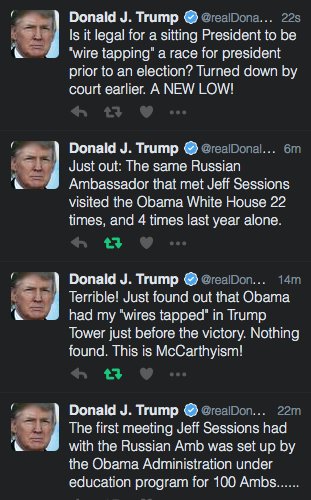 US President Donald Trump has claimed Barack Obama had his "wires tapped" before he won the election.

He tweeted: "Terrible! Just found out that Obama had my "wires tapped" in Trump Tower just before the victory. Nothing found. This is McCarthyism!"

The president added: "Is it legal for a sitting President to be "wire tapping" a race for president prior to an election? Turned down by court earlier. A NEW LOW!"

In a further tweet, he wrote: "I'd bet a good lawyer could make a great case out of the fact that President Obama was tapping my phones in October, just prior to Election!"

And in an additional message, he said: "How low has President Obama gone to tapp my phones during the very sacred election process. This is Nixon/Watergate. Bad (or sick) guy!" 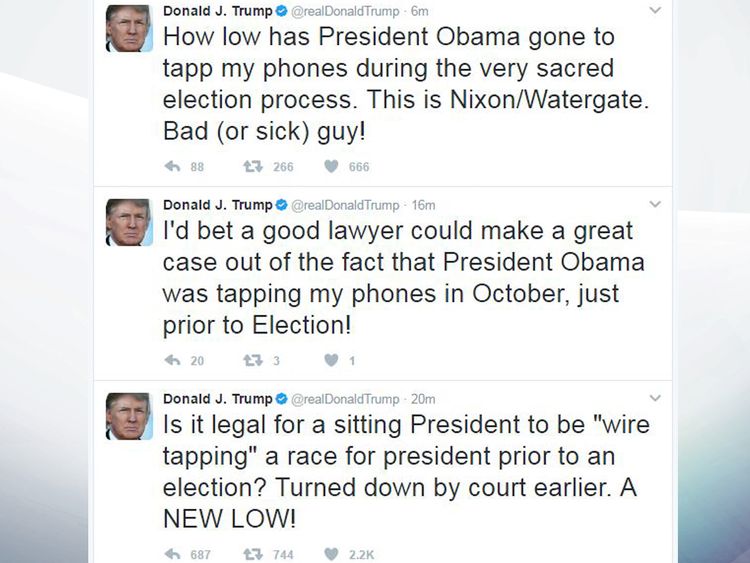 
Let’s face it: From the day Trump won election, his foes have waged a by-any-means-necessary campaign to overturn the results.

Officials (likely Obama-era holdovers) have broken the law and leaked what they hoped would be damaging info. Groups tied to Obama have stirred up angry protests against Trump and other Republicans.

The New York Times reported Obama’s staff purposely spread information throughout the administration that could hurt Trump, though they said the goal was to make sure the info wasn’t buried.

Critics say Trump’s wiretap claim is baseless, but what is truly lacking in solid evidence is the claim that there was some sort of collusion between Trump or his aides and Russian officials to hijack the election. Yet that’s all Trump’s foes (and much of the press) want to talk about.

Remember, too: Team Obama has a record of abusing power for political gain, as when the IRS targeted conservative groups.

At this point, it’s hard to know for sure if Trump Tower was actually bugged, and if so, who authorized the tapping and why. But given Team Obama’s record — and the never-ending bid to overturn the election — there’s little doubt why Trump might think the worst.
more here

Former CIA analyst Larry C. Johnson says that according to his sources, the Obama administration worked with the NSA, the CIA and Britain’s GCHQ to disseminate information about Donald Trump that was illegally obtained via surveillance before the election.

Johnson joined the CIA in 1985 and was later promoted to become Senior Regional Analyst for Central America before moving on to work for the State Department.