There has been a fight. A white Jeep allegedly opened fire on Chop. Jeep then drove through barricades and was fired upon by chaz security.

some of the aftermath of this morning's deadly #shooting in CHOP. 6/29/20

Hundreds of protesters are reportedly refusing the leave the police-free zone.

One man has died and another remains hospitalized in critical condition Monday following the latest shooting in Seattle's Capitol Hill Organized Protest, or CHOP.

The shooting victim who arrived at the hospital at 3:30 a.m. from the CHOP area on Capitol Hill in Seattle has unfortunately died, Susan Gregg, a hospital spokeswoman, told Fox News. He was transported to the hospital via Seattle Fire Department medics.

The other male arrived at about 3:15 a.m. by private vehicle. He remains in critical condition in the intensive care unit.

The Seattle Police Department said officers were investigating a shooting near 12 Avenue and Pike Street, where two people were reported injured.

That corner is about two blocks away from Cal Anderson Park, where protesters initially camped out in tents to occupy the area first referred to as the Capitol Hill Autonomous Zone.

The encampment has become more difficult to manage, drawing violence and a large homeless population since the onset of the occupation three weeks ago.

Organizers on Sunday said they’re seeking to move into the abandoned East Precinct, where most protest leadership have already taken up shelter, as part of an effort to secure their best bargaining chip in convincing city officials to act on police reform and other demands, the Seattle Times reported.

City efforts to dismantle the CHOP were thwarted Friday when protesters laid down in the street to block Seattle Department of Transportation crews and heavy machinery from removing barricades around the occupied zone. Crews left after two hours without removing the barricades.

Negotiations between city leadership and organizers over the weekend did not prove fruitful, as hundreds of protesters have reportedly refused to leave the Capitol Hill area.

This is not the first shooting linked to the CHOP. The first and only fatality was recorded on June 20 when a 19-year-old protester was shot around 2:30 a.m. near Cal Anderson Park on 10th Avenue and East Pine Street inside the area referred to as the CHOP. Another man was injured in the incident.

“Officers attempted to locate a shooting victim but were met by a violent crowd that prevented officers’ safe access to the victims,” Seattle Police Department said in a press release at the time.

“To ensure the safety of medical personnel, police staged with Seattle Fire at the edge of the CHOP area and were gathering information about where the shooting victim was located when they learned he had been transported in a private vehicle to Harborview Medical Center,” a police press release said.

He has since been released from the hospital and declined to speak with detectives.

“Officers and Seattle Fire Department medics staged nearby and met the victim outside the area known as the Capitol Hill Occupied Protest (CHOP),” a police press release said.

“The victim refused to provide any information about the circumstances surrounding the shooting or a suspect description to officers. Medics transported the victim to Harborview Medical Center for treatment of a gunshot wound to the calf.”

Perhaps an other sign that CHOP is coming to an end ? the toilets are taken away. 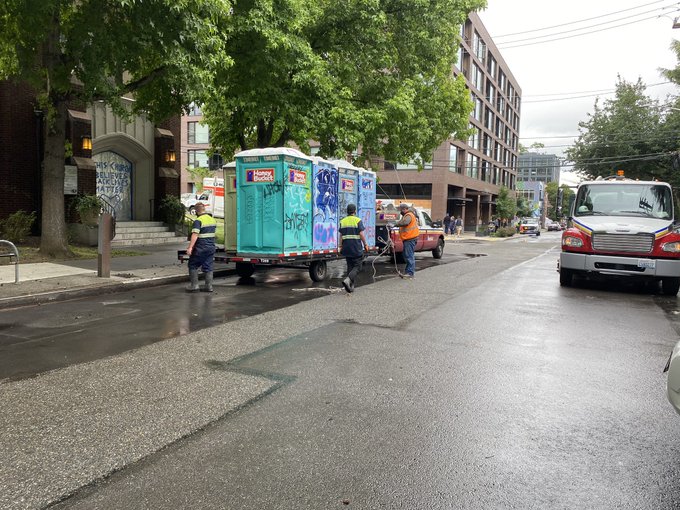 And graffiti is being cleaned off walls. 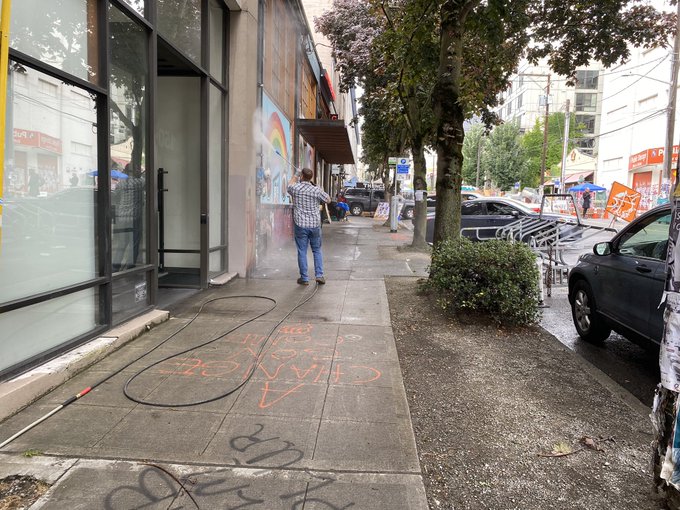 And Seattle mayor Jenny who defended CHOP is outraged after protesters showed up at her home.

She said the protest put her family and kids at risk

Seattle Mayor Jenny Durkan expressed outrage after Black Lives Matter protesters showed up at her home Sunday afternoon, despite her previous support and defense of the "CHOP" encampment.

Protesters targeted her home after Durkan announced last week that the city would no longer support the Capitol Hill Organized Protest encampment and would seek to remove the concrete barriers that helped define the autonomous zone. But the CHOP remains intact.

Durkan released a statement expressing her anger at the protest. She was especially upset that Seattle City Council member Kshama Sawant had joined the protesters at her home.

"Mayor Durkan and her family are in the state program to keep their address confidential because of the death threats mostly related to her work as Seattle's U.S. Attorney under President Obama. Instead of working to make true change, Councilmember Sawant continues to choose political stunts," read the statement from her office.

"Tonight she did so without regard for the safety of the Mayor and her family. The Mayor was not even home — she was working at City Hall. Seattle can and should peacefully demonstrate but should not put families and children at risk," the statement concluded.

KING-TV spoke to one protester about why they targeted her home.

"We came down to Jenny Durkan's mansion to bring the demands of the movement and of the families who have been impacted by police violence, uh, to her doorstep and she seems to not be able to hear our demands any other way," she said.

Complicating the matter was yet another shooting Monday morning at the CHOP. One black 16-year-old teen was shot and killed, and a 14-year-old was injured and is in critical condition. Police are investigating the incident, but no suspects have been identified. 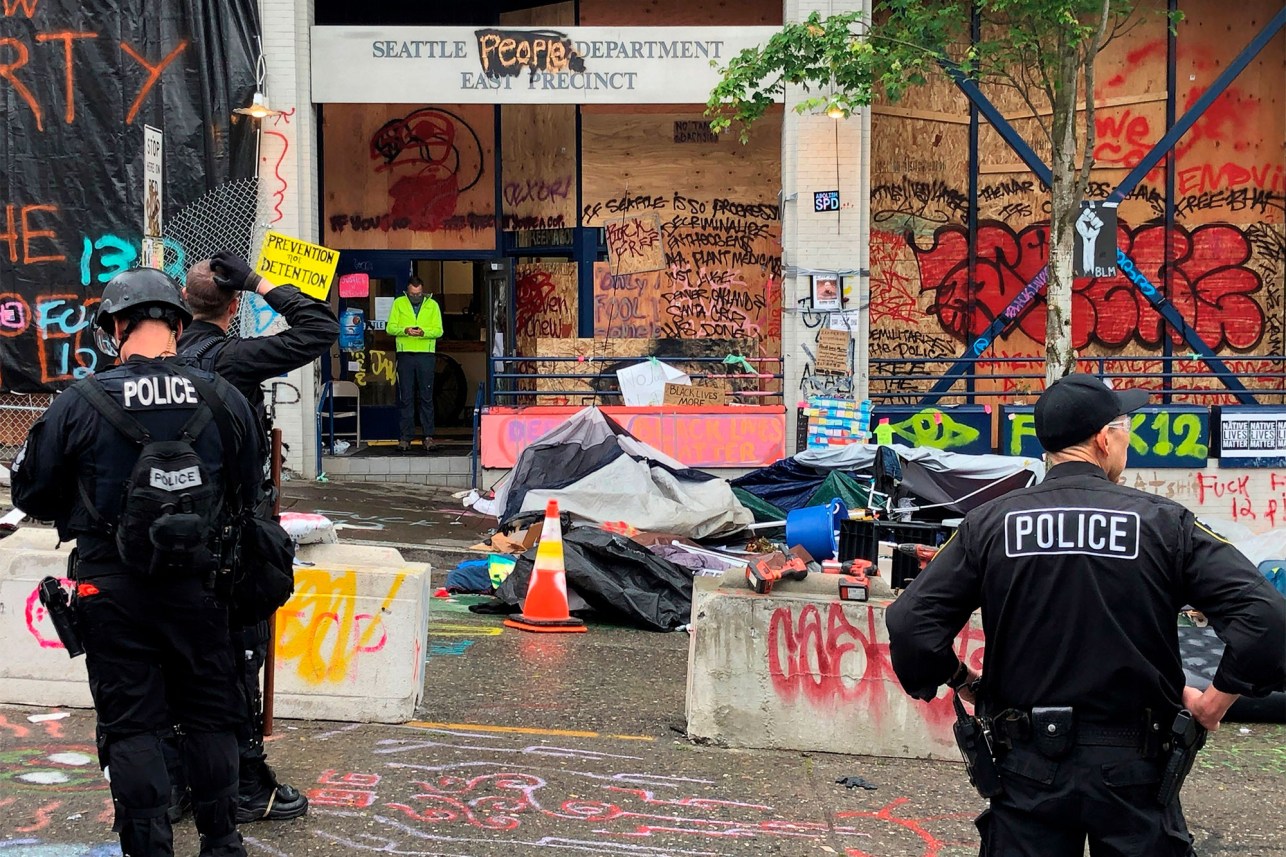 End of an era: CHOP finally dismantled by Seattle police

CHOPPED OUT: Kayleigh McEnany Says Seattle SUMMER OF LOVE Chop STYLE IS OVER

Clean-up continues a day after Seattle's 'CHOP' zone was dismantled


Seattle Businesses Fight Back Against The Radicals: John Eastman On The Ingraham Angle

BACKLASH! RECALL PETITIONS Against Democrat Mayors and Governors SURGE Across the NATION