Childhood
I was raised to believe in God from childhood. I attended church nearly every Sunday, went to Bible school, and sang in the choir. Yet religion was never a really big part of my life.

There were times when I thought myself close to God. I often prayed to him for guidance and strength in times of despair or for a wish in times of want. But I soon realized that this feeling of closeness soon evaporated when I was no longer begging God for something. I realized that I even though I believed, I lacked faith.

World Was A "Game"
I perceived the world to be a game in which God indulged in from time to time. He inspired people to write a Bible and somehow people were able to find faith within this Bible.

As I grew older and became more aware of the world, I believed more in God. I believed that there had to be a God to bring some order to the chaotic world. If there were no God, I believed the world would have ended in utter anarchy thousands of years ago. It was comfort to me to believe there was a supernatural force guiding and protecting man.

Children Take Religion From Parents
Children usually assume their religion from parents. I was no different. At the age of 12, I began to give in depth thinking to my spirituality. I realized there was a void in my life where a faith should be. Whenever I was in need or despair, I simply prayed to someone called Lord. But who was this Lord truly? I once asked my mother who to pray to, Jesus or God. Believing my mother to be right, I prayed to Jesus and to him I attributed all good things.

I have heard that religion cannot be argued. My friends and I tried to do this many times. I often had debates with my friends about Protestantism, Catholicism, and Judaism. Through these debates I searched within myself more and more and decided I should do something about my emptiness. And so at the age of 13, I began my search for truth.

Humankind is always in constant pursuit of knowledge or the truth. My search for truth could not be deemed as an active pursuit of knowledge. I continued having the debates, and I read the Bible more. But it did not really extend from this. During this period of time my mother took notice of my behavior and from then on I have been in a "religious phase." My behavior was far from a phase. I simply shared my newly gained knowledge with my family. I learned about the beliefs, practices, and doctrines within Christianity and minimal beliefs and practices within Judaism.

A few months within my search I realized that if I believe in Christianity I believed myself to be condemned to Hell. Not even considering the sins of my past, I was on a "one way road to Hell" as southern ministers tend to say. I could not believe all the teachings within Christianity. However, I did try.

Call to "salvation?"
I can remember many times being in church and fighting with myself during the Call to Discipleship. I was told that by simply confessing Jesus to be my Lord and Savior I would be guaranteed eternal life in Heaven. I never did walk down the aisle to the pastor's outstretched hands, and my reluctance even increased my fears of heading for Hell. During this time I was at unease. I often had alarming nightmares, and I felt very alone in the world.

But not only did I lack belief but I had many questions that I posed to every knowledgeable Christian I could find and never really did receive a satisfactory answer. I was simply told things that confused me even more. I was told that I am trying to put logic to God and if I had faith I could simply believe and go to Heaven. Well, that was the problem: I did not have faith. I did not believe.

Questioning Belief
I did not really believe in anything. I did believe there was a God and that Jesus was his son sent to save humankind. That was it. My questions and reasoning did, however, exceed my beliefs.

The questions went on and on. My perplexity increased. My uncertainty increased. For fifteen years I had blindly followed a faith simply because it was the faith of my parents.

"Muslim - Christian Dialog"
Something happened in my life in which the little faith I did have decreased to all but nothing. My search came to a stop. I no longer searched within myself, the Bible. or church. I had given up for a while. I was a very bitter parson until one day a friend gave me a book. It was called "The Muslim-Christian Dialogue."

I took the book and read it. I am ashamed to say that during my searching never did I once consider another religion. Christianity was all I knew, and I never thought about leaving it. My knowledge of Islam was very minimal. In fact, it was mainly filled with misconception and stereotypes. The book surprised me. I found that I was not the only one who believed there was a simply a God. I asked for more books. I received them as well as pamphlets.

Learned Islam
I learned about Islam from an intellectual aspect. I had a close friend who was Muslim and I often asked her questions about the practices. Never did I once consider Islam as my faith. Many things about Islam alienated me.

After a couple months of reading the month of Ramadan began. Every Friday I could I joined the local Muslim community for the breaking of the fast and the reciting of the Quran. I posed questions that I may have come across to the Muslim girls. I was in awe at how someone could have so much certainty in what they believed and followed. I felt myself drawn to the religion that alienated me.

Islam Brought Comfort & Reminder
Having believed for so long that I was alone, Islam did comfort me in many ways. Islam was brought as a reminder to the world. It was brought to lead the people back to the right path.

Beliefs were not the only thing important to me. I wanted a discipline to pattern my life by. I did not just want to believe someone was my savior and through this I held the ticket to Heaven. I wanted to know how to act to receive the approval of God. I wanted a closeness to God. I wanted to be God-conscious. Most of all I wanted a chance for heaven. I began to feel that Christianity did not give this to me, but Islam did.

I continued learning more. I went to the Eid celebration and Jummah and weekly classes with my friends.

Through religion one receives peace of mind. A calmness about them. This I had off and on for about three years. During the off times I was more susceptible to the temptations of Satan. In early February of 1997 I came to the realization that Islam was right and true. However, I did not want to make any hasty decisions. I did decide to wait.

Satan Tempted
Within this duration the temptations of Satan increased. I can recollect two dreams in which he was a presence. Satan was calling me to him. After I awoke from these nightmares I found solace in Islam. I found myself repeating the Shahadah. These dreams almost made me change my mind. I confided them in my Muslim friend. She suggested that maybe Satan was there to lead me from the truth. I never thought of it that way.

On March 19, 1997 after returning from a weekly class, I recited the Shahadah to myself. Then on March 26, I recited it before witnesses and became an official Muslim.

...
It has been about five months since I recited the Shahadah. Islam has made me a better person. I am stronger now and understand things more. My life has changed significantly. I now have purpose. My purpose is to prove myself worthy of eternal life in Jennah. I have my long sought after faith. Religion is a part of me all the time. I am striving everyday to become the best Muslim I can be.

People are often amazed at how a fifteen year old can make such an important decision in life. I am grateful that Allah blessed me with my state of mind that I was able to find it so young.

Striving to Be A Good Muslim - In Non-Muslim Society
It is hard to be a good Muslim in a Christian dominated society. Living with a Christian family is even harder. However, I do not try to get discouraged. I do not wish to dwell on my present predicament, but I believe that my jihad is simply making me stronger. Someone once told me that I am better off than some people who were born into Islam, in that I had to find, experience, and realize the greatness and mercy of Allah. I have acquired the reasoning that seventy years of life on earth is nothing compared to eternal life in Paradise.

I must admit that I lack the aptitude to express the greatness, mercy, and glory of Allah. I hope my account helped others who may feel the way I felt or struggle the way I struggled. 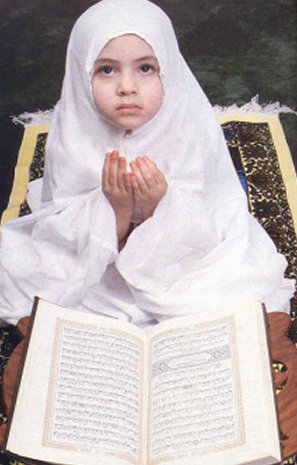