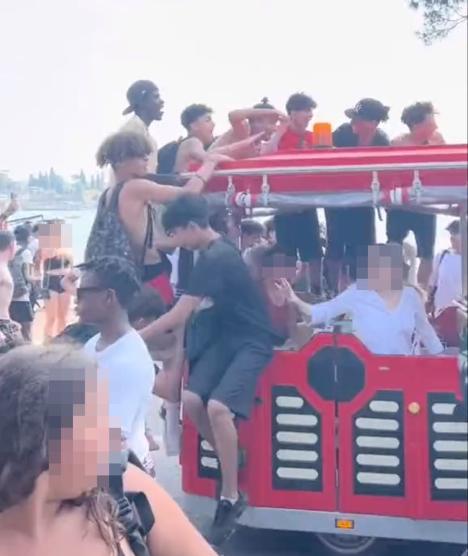 Recent violence in German outdoor swimming pools has alarmed the Federal Association of German Swimming Champions (BDS) to such an extent its president Peter Harzheim has said he can no longer recommend that families visit such facilities on weekends.

While speaking to Bild TV., Harzheim claimed he would be “acting irresponsibly” if he attended an outdoor pool with his own three grandchildren

The warning comes after a mass brawl over the weekend in a Berlin swimming pool involving approximately 100 migrants, in which a number of children were punched and kicked, including a 10-year-old who suffered a blow to his head during the melee. The incident was caught on video and widely reported on in the German media.

“These pictures shake me. When I see that, I shudder,” Harzheim said. “These people that I see there have no respect for people. It can not go on like that. Pool operators need to be more active and choose their visitors better,” he added.

“It cannot be that the people who commit crimes there are released after two hours,” Harzheim said. “Politicians turn a blind eye to the problems and let us down,” he added.

According to Harzheim, the immigrant background of some perpetrators should not mean that the problem is not addressed.

German spa bans women from wearing bikinis due to ‘cultural sensitivities’, but burkinis still allowed
57.4 percent of the local population has a migrant background

Migrants have been involved in a number of notable crimes and assaults at swimming pools in recent years, helping underline Harzeim’s point.

In 2016, a town near Cologne banned all migrant men from attending a public pool due to repeated cases of sexual harassment and one criminal case. The ban was instituted to persuade asylum seekers to “change their behavior,” according to town authorities. A leaked police report in 2016 also showed that there was a concerning rise in migrant sexual assaults at swimming pools in the German city of Düsseldorf.

The internal report stated, “(We) can confirm a surge in sex crimes at these establishments. In particular rape and the sexual abuse of children in bathing establishments have given us grave cause for concern. The perpetrators are, for the most part, immigrants.”

In 2017, two asylum seekers, including a Syrian former ISIS member, were arrested for sexually assaulting two girls, aged 12 and 14.

German broadcast reports have also picked up on the topic, highlighting how “youth gangs” now present a growing challenge for lifeguard staff attempting to maintain order.

“We have a 15-meter and 10-meter diving boards, and that means action, and testosterone plays a role in tha,” said Thomas Struck, the chief lifeguard at the public swimming pool in Kehl.. “It gets hot, you add a Red Bull into the mix, and it gets explosive when the different rival gangs who know each other from the different blocks meet. Then, they come at each other.”

In the short documentary, other guests note that they have seen physical assaults at the swimming pool, and when such incidents occur, the entire swimming pool needs to be shutdown for the day.

Struck said that one incident involving 50 youths who climbed over the fence to break into the swimming pool resulted in a massive police action to clear the area. Since then, they had to hire a large number of security guards to help keep order on the premises.

Such mass incidents are commonplace in the summer months, such as a police action in 2019 in Düsseldorf’s Rheinbad swimming pool that required 60 officers to restore order. During the incident, groups of men fighting got too close to one family, with the father complaining about “North Africans” and their behavior at the swimming pool. The men then sight their sights on the father and threatened to assault him. Police arrived in time to prevent the man from being attacked, but police themselves were pelted with beverage bottles as they escorted the family out of the pool, which was then closed for the day. Witnesses speaking to Rheinische Post said it was “Arabs and North Africans” and that even people not involved in the incident were “harassed and also insulted” by the men.

In an example of the inability of German authorities to control such incidents, the very next day the same group of men came back, forcing a number of families to leave the public swimming pool. Police were called again and forced to close the swimming pool for the second day in a row. The news report describes how the police were surrounded by “200 yelling young men” who hurled insults at responding officers.

In 2021, three youths assaulted a lifeguard in the German town of Schlitz, forcing him to deploy pepper spray. Although one of the youths was later arrested, his identity was not released due to his age.

An article in the Bayern Kurier also detailed a wide range of incidents in German public swimming pools across the country, such as in Essen where a group of young men beat two lifeguards and punched a 12-year-old girl in the stomach for getting in the way.

“I am outraged by the disrespect of the perpetrators,” said Mayor Thomas Kufen (CDU) at the time. “We will take action after the incident. In addition to a criminal complaint, the attackers will also be banned from the premises.”

As in many other cases, the city was forced to double the number of its security guards in response.

Riots broke out in Hesse after an entrance to a bathing lake was closed, resulting in 200 young people trying to force their way into the site. They then threw stones at security guards.

The article goes on to detail a riot involving 200 youths in Hesse, an assault with pepper spray in Mannheim, sexual assault in Stuttgart, and sexual harassment in Dorum in Lower Saxony, all taking place at public swimming pools across Germany.

Edgar Koslowski, a lifeguard for 40 years and chairman of the Baden-Württemberg state association at the Federal Association of German Swimming Champion, told the German newspaper Stuttgarter Nachrichten: “I’m observing a decline in values ​​and a lack of consideration that didn’t exist before. Twenty years ago, the lifeguard was still a person of respect. That is no longer the case today. There are no longer any laws for a specific clientele. This is particularly evident in problem pools in urban areas.”

Such incidents are still regularly occurring despite public pools hiring more security guards and police beefing up patrols in response to past incidents. Just last week, three 12-year-old girls were sexually assaulted in the Kaufbeuren public swimming pool in Bavaria by a group of six older teenagers described as having dark skin and speaking broken German. Police are still looking for the suspects.

The outdoor pool culture in Germany has a long and rich history, with the culture and design of these pools developing during the 1920s through a social movement known as “Lebensreform,” which translates literally to “life reform.” The German and Swiss movement promoted a back-to-nature lifestyle and rejection of industrialization. Due to its popularity, public pools became widespread throughout the country, traditionally offering Germans a chance or exercise, recreation, and a break from city life for those living in urban areas.

However, these once peaceful areas now often overcrowded, feature large security details, bag searches for weapons, a strong police presence on warmer days, and now a warning that children should not even attend on weekends.

A number of locations, such as in Düsseldorf, recently made it necessary to impose an ID requirement in response to aggressive migrants. In the past, the German swimming pool association has called for strict action against violent offenders.