Prosecutor shuts down probe into Roma register
A Swedish prosecutor has closed an investigation against two police officers suspected of crimes in connection with a Roma register operated by Skåne police, arguing that the police had a legitimate legal reason for the lists.

“The main question is whether this was an ethnic register. The answer to that question is that there is no longer any reason to believe that," prosecutor Mats Åhlund explained to news agency TT.
"Many will not understand what I am trying to convey; there will surely be many who will continue to feel aggrieved,” he said. “I have to make a legal assessment - can I believe on an objective basis that I can get a conviction if I prosecute? It is pretty clear to me that I won’t." 'Your benefits system is crazy. It's like finding a sackful of cash left on the road': How shocking admission by Rudi and his huge Romanian family debunks Eurocrat's claims that 'benefit tourism is a myth' 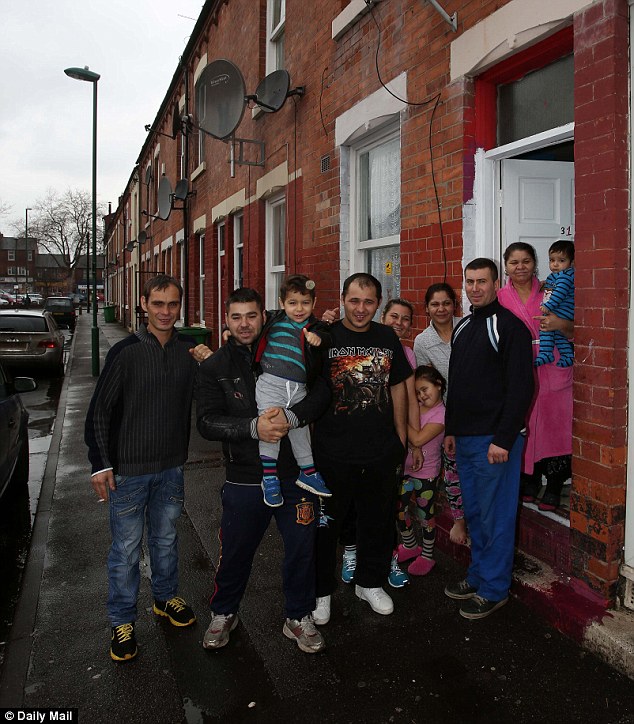 Rudi Ion struggles to count up the children from his huge Romanian clan who now call Britain home. It could be 100, he tells me.

‘I’ve got 25 cousins all living around Nottingham, each with three or four kids,’ he adds with a loud laugh.

‘Your benefits system is crazy — I would actually say it was sick,’ he says, as he makes a gesture involving sticking his two fingers down his throat.

Of course Romanians will settle in Britain if they get this kind of money. It is like walking down the road and seeing a sack full of cash that has been dropped, picking it up and no one saying anything.

‘I have never been told to look for work by the job centre. I have never called back there after I got the National Insurance number. Why would I want a real boss when I get £300 put into my bank account each week for nothing?

‘There is the child benefit of £170 a month for Ionut and Constantin, too. In Romania, we were only given £17 a month for them. Now I sing “God praise your Queen Elizabeth” every day, because we have arrived in heaven.’

That pronouncement was followed by David Cameron’s claim that arrivals of Romanians (and Bulgarians) were ‘reasonable’, although he admitted no one had done a headcount, so was guessing from ‘what I read and see’.

So did Rudi think that Cameron and the Ambassador were right?

‘Of course not,’ he told me, before inviting me to Nottingham to meet his family the next day.

There, he explained further: ‘Each bus that comes from Romania is full of people coming to live here. Each plane has 20, 30 or 40 of these passengers on board, and we Roma are also driving here by private car. We are not talking about visitors but those who come to stay.

‘You will get more people when the weather gets to spring. We feel good here because it is a better life. At home, even if you offer to work on a pig farm, the farmer says “No” because you are a gipsy.’

‘We Romanians can go anywhere we want in Europe now — but, of course, it is only Britain that pays us to live.

‘Of course, we want to be here. I will only run away when your country starts sinking under the weight of people, which will happen one day.’

Then he turns to the big TV set on the wall in the overcrowded living room. It is blaring out the news from a Romanian TV channel showing six-foot snowdrifts in Bucharest.

As Rudi points to the chilly scenes, he asks frankly: ‘Who would want to be there when you look after us so well here?’

Police evict Romanians from Stockholm camp
Police have evicted a large group of Romanian migrants who had set up temporary living arrangements in a suburb of northern Stockholm.
Police estimated that there were 100 Romanians living in the area where they had set up camp near the Helenelund commuter train station.
"Most have left during the night, now there are around 15-20 of them still here," Mona Johansson of the Norrort police told the Dagens Nyheter newspaper on Thursday morning.

A group of demonstrators were on the scene on Thursday morning in Helenelund, northern Stockholm, to meet the police, and were beating drums and chanting for the rights of the migrants.[...]
Jonas Lundgren, a Left Party politician in Sollentuna, told Sveriges Radio that eviction was not the best solution.
"They are sick, vulnerable, and poor. Now the municipality wants to evict them from what little they have, and which they call home. This is not worthy of a democratic society like Sweden in 2014," he said.

An estimated 40,000 Roma people live in camps on the outskirts of Italian cities and are denied access to adequate public housing, education and healthcare.
Italy has often come under attack for its treatment of the community.

A group of Naples residents threw stones and fireworks at the camp in Poggioreale after a 16-year-old girl claimed two Roma men attempted to assault her, La Repubblica reported. They also formed a roadblock in protest.
The girl is reported to have returned home on Tuesday night in an “agitated state” following the alleged attempted assault.

La Repubblica said that two of her cousins went to the camp, which houses about 250 Roma people, in a bid to “punish” the two men, but instead came to blows and ended up with minor injuries.
Police are now monitoring the camp while the president of Poggioreale has called for it to be closed.

In October, Amnesty International accused the Rome authorities of keeping thousands of Roma people on the margins of society through an “assisted housing” system designed to banish the community in “ghettos” beyond the city’s periphery.

Did gypsies cut off man's penis in revenge for him sleeping with one of their girlfriends? Police search A-road for missing manhood after arrest of suspect, 22.

40-year-old found in distressed state at the side of the A66 in Middlesbrough
Police said he had suffered serious injuries, and wounds to his groin
It was reported a gypsy gang attacked the man in dispute over woman
It is understood that his penis was cut off and was missing
Police sealed off the busy route to search for it
Man, 22, arrested on suspicion of assault in relation to the incident

European Roma Summit 4 April 2014 in Brussels, Belgium
Around 500 representatives of EU institutions, national governments and parliaments, international organisations, mayors, civil society organisations (including Roma organisations) and local and regional authorities are invited to express their views on how to deliver further on the implementation of the EU Framework for national Roma integration strategies. [...]
The summit will focus on three major themes that will be the subjects of panel discussions:
Making policies inclusive for all Roma at the local level.
Making EU funding reach the local and regional authorities to support Roma integration.
Making Roma integration a local reality in enlargement countries.