Honest, it was an accident: German builders install swastika at new shopping center 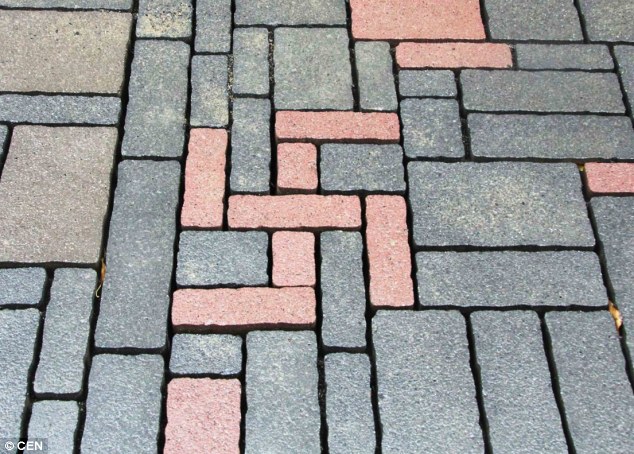 The new pathway had just been officially unveiled in the pedestrian zone of one of the main shopping streets in Goslar, Lower Saxony.
Police confirmed that there was indeed a swastika in the middle of the newly laid walkway, but said they could not determine that it had been done deliberately.
City Council officials however said that deliberate or not, they ordered it covered and got the builders back in to rearrange the brickwork and eradicate the Nazi symbol.
A spokesman for the city council Christian Burgart said: ‘We do not tolerate such behaviour here.
'It is inexcusable, therefore we ordered it to be removed straight away.’

Unfavorable Views of Jews and Muslims on the Increase in Europe

Ethnocentric Attitudes Are on the Rise in Europe

Overview
Ethnocentric attitudes are on the rise in Europe. Growing numbers of people in several major European countries say they have an unfavorable opinion of Jews, and opinions of Muslims also are more negative than they were several years ago.

A spring 2008 survey by the Pew Research Center’s Pew Global Attitudes Project finds 46% of the Spanish rating Jews unfavorably. More than a third of Russians (34%) and Poles (36%) echo this view. Somewhat fewer, but still significant numbers of the Germans (25%) and French (20%) interviewed also express negative opinions of Jews. These percentages are all higher than obtained in comparable Pew surveys taken in recent years. In a number of countries, the increase has been especially notable between 2006 and 2008.

Great Britain stands out as the only European country included in the survey where there has not been a substantial increase in anti-Semitic attitudes. Just 9% of the British rate Jews unfavorably, which is largely unchanged from recent years. And relatively small percentages in both Australia (11%) and the United States (7%) continue to view Jews unfavorably.

Opinions about Muslims in almost all of these countries are considerably more negative than are views of Jews. Fully half of Spanish (52%) and German respondents (50%) rate Muslims unfavorably. Opinions about Muslims are somewhat less negative in Poland (46%) and considerably less negative in France (38%). About one-in-four in Britain and the United States (23% each) also voice unfavorable views of Muslims. Overall, there is a clear relationship between anti-Jewish and anti-Muslim attitudes: publics that view Jews unfavorably also tend to see Muslims in a negative light.

The trend in negative views toward Muslims in Europe has occurred over a longer period of time than growing anti-Jewish sentiment. Most of the upswing took place between 2004 and 2006, and there has even been a slight decrease in some countries since 2006.

Negative attitudes toward Christians in Europe are less common than negative ratings of Muslims or Jews. And views about Christians have remained largely stable in recent years, although anti-Christian sentiments have been on the rise in Spain – about one-in-four Spanish (24%) now rate Christians negatively, up from 10% in 2005. Similarly, in France 17% now hold an unfavorable view of Christians, compared with 9% in 2004.

A notable parallel between anti-Muslim and anti-Jewish opinion in Western Europe is that both sentiments are most prevalent among the same groups of people. Older people and those with less education are more anti-Semitic and anti-Muslim than are younger people or those with more education. Looking at combined data from France, Germany and Spain – the three Western European countries where unfavorable opinions of Jews are most common – people ages 50 and older express more negative views of both Jews and Muslims than do those younger than 50. Similarly, Europeans who have not attended college are consistently more likely than those who have to hold unfavorable opinions of both groups.

These are among the latest findings from the 2008 Pew Global Attitudes survey. The current report focuses on findings related to religion, and several sections are devoted specifically to issues among Muslim publics. The polling was conducted March-April 2008 in 24 countries from regions throughout the world.*

Widespread Religiosity
In most of the countries included in the survey, religion is considered a central feature of life. However, this is often less true among younger people. In many nations, including the United States, people under age 40 are less likely than others to say religion is very important to them.

And there is also a notable gender gap in many nations regarding religion’s importance. Consistently, women are more likely than men to say religion plays a very important role in their lives. Among the countries on the survey, the largest gender gap is in the United States, where 65% of women rate religion as very important, compared with only 44% of men.

Since 2002, the percentage saying that suicide bombing and other forms of violence against civilians are justified to defend Islam from its enemies has declined in most predominantly Muslim countries surveyed. For instance, in 2002 roughly three-in-four Lebanese Muslims (74%) said such attacks could often or sometimes be justified; today, 32% take this view.

Opinions about Osama bin Laden have followed a similar trend. For instance, only three years ago, about six-in-ten (61%) Jordanian Muslims voiced at least some confidence in the al Qaeda leader; today, just 19% express a positive view. In 2003, 20% of Lebanese Muslims and 15% of Turkish Muslims had positive views of bin Laden. Today, seven years after the September 11 attacks, bin Laden’s ratings have plummeted to the low single digits in both countries (Turkey 3%, Lebanon 2%). Still, substantial numbers of Muslims continue to express confidence in bin Laden in Nigeria (58%), Indonesia (37%) and Pakistan (34%).

Conflict in the Muslim World
Most Muslims in the nations surveyed by Pew continue to worry about the rise of Islamic extremism, both at home and abroad. Majorities in Indonesia, Pakistan, Tanzania, Lebanon, Egypt, Jordan and Nigeria say they are concerned about extremism in their own country and in other countries around the world.

Many are also concerned about growing tensions between Sunni and Shia Muslims. There is a widespread perception that Sunni-Shia tensions are not limited to Iraq and instead are a broader problem affecting the Muslim world more generally.

Large numbers of Muslims in several countries surveyed also see a struggle taking place within their countries between Islamic fundamentalists and those who want to modernize the nation. In Turkey, in particular, a large and growing majority sees such a conflict taking place, but this view also is common in Lebanon, Tanzania, Indonesia and Pakistan.

Additional Findings
▪ France stands out as the most secular nation included in the survey. Only one-in-ten in that country consider religion very important in their lives and 60% say they never pray.
▪ While European views towards Jews have become more negative, the deepest anti-Jewish sentiments exist outside of Europe, especially in predominantly Muslim nations. The percentage of Turks, Egyptians, Jordanians, Lebanese and Pakistanis with favorable opinions of Jews is in the single digits.
▪ Two pillars of Islam are commonly practiced by the Muslims surveyed: prayer and fasting. Majorities in most of the eight Muslim publics included pray five times a day and fast most days of Ramadan.
▪ Views of Hamas tend to be negative in Lebanon, Turkey, and Egypt. Jordan is the only predominantly Muslim country surveyed in which a majority express a positive view of the militant Palestinian organization.
▪ Views of the militant Lebanese Shia organization Hezbollah are overwhelmingly negative in Turkey, while slim majorities in Egypt and Jordan express positive views of Hezbollah. In Lebanon itself, Hezbollah is almost unanimously popular among the country’s Shia community, but is overwhelmingly unpopular among Sunnis and Christians.
▪ Saudi Arabia receives positive ratings from most of the publics in the predominantly Muslim countries surveyed, although Turkey is an exception; 43% of Turks express an unfavorable view of Saudi Arabia, while just 36% hold a favorable view.

* All samples are nationally representative except Brazil, China, India and Pakistan, which are disproportionately urban.

Similarly, 34% of people on the political right have a negative opinion of Jews, compared with 28% of those on the left and 26% of centrists.

“Gematigde imam” in actie in Denemarken