Hospitals in Mayor Sadiq Khan’s London resemble those in a war zone, a senior surgeon working to save victims of the capital’s surging violent crime wave has said.

The shock comments made Thursday morning come after two more men were killed overnight, a couple of days after another night of violence saw a boy, 16, stabbed to death and a 17-year-old girl shot in a “drive by”.

Wednesday night’s killings, both in Hackney, East London, brought the death toll from suspected murder in the capital to 50 so far this year, pulling away from New York City, which London overtook at the weekend.

Dr. Mark Griffiths, the lead surgeon at Barts Health NHS Trust in East London, said that knife and gun wounds had moved from a “niche” part of his job to a daily chunk of his workload, and a growing number of victims were “children”.

“Some of my military colleagues have described their practice here as similar to being at [Camp] Bastion,” Dr Griffiths told the Today programme on BBC Radio 4.

“We used to look after people in their twenties. Now people are often in their mid to late teens and children in school uniforms are being admitted under our care with knife and gun wounds.”

He added: “Whereas a young boy being stabbed five or six years ago would have been a horror story, now it’s normal.

“People expect to see people being killed on a daily basis. Members of the public who are not involved in gangs or violence let this pass without comment and you get the society you deserve if you ignore violence.”

On Wednesday, Mayor Khan responded to the crisis by blaming “Tory” cuts to the police, and claiming the crime was affecting other areas of the UK, too.

Meanwhile, Amber Rudd, the Home Secretary, has demanded that social media firms censor online content in response to the crime wave, claiming that deleting videos will help save lives.


London knife carnage: SIX teenagers are stabbed within 90 minutes of each other tonight in FOUR separate knife attacks across the capital

Six teenagers have been stabbed tonight in four separate attacks across London amid a surge in violent crime.

The attacks - which police believe are not linked - come just hours after a man was knifed down this afternoon in Wandsworth.

The first incident this evening happened in Mile End, east London, just after 6pm, when three teenagers were hospitalised - two of them with serious injuries - after a knife attack took place in front of horrified witnesses.

The less-severely injured youth was later discharged and arrested on suspicion of attempted murder.

By 7pm, a fifth victim, described as a young teenage boy, was knifed outside HSBC bank on Ealing Broadway in West London.

Minutes later across the city in Newham, a 13-year-old boy was left seriously injured after he was reportedly set upon by a gang of youths.


On Tuesday, 16-year-old Amaan Shakoor became the youngest murder victim in London so far this year after he was shot dead on Monday in Walthamstow. Wokingham town mayor resigns after social media postings come to light
Cllr Peter Lucey decided to step down with immediate effect after an investigation was launched in to his posting of links to far right and Islamophobic websites.
[...]
Cllr Lucey’s Facebook page, which was viewable by anyone yesterday, also included likes to a fan page to controversial Dutch politician Geert Wilders and the former UKIP leadership candidate Raheem Kassam who has just self-published a book called Enoch Was Right: ‘Rivers of Blood’ 50 Years On.
There are also posts from Cllr Lucey showing him with controversial Canadian author Mark Steyn, who hold anti-Islamic views, at a book signing.

Conservatives Suspend Candidate Who Said Islam Is ‘Totalitarian’
The Conservatives have suspended a candidate in London for ‘Islamophobic’ tweets after it emerged she had said that religion “undermines hard fought for values” like free speech in Britain.

Karen Sunderland, who was standing as the party’s candidate for Crofton Park in Lewisham, was also found to have criticised the hijab and compared Islam to Nazism in messages posted from her Twitter account, which has since been made private.

Lewisham Labour mayoral candidate Damien Egan, who had called for her removal over what he described as “appalling remarks”, said he welcomed her suspension — declaring the “diversity and openness” of the London region to be its “greatest strength”.
“Islamophobic comments like this are deeply divisive and they have no place in our community,” he added.

The Conservatives confirmed that Ms. Sunderland had been suspended from the party pending an investigation over three tweets made between October and December last year.
In one of the offending messages posted to Twitter, where she describes herself as an “unflinching Brexiteer”, the London candidate wrote: “Love your optimism. The thing is, religion undermines the hard fought for values and tolerances of progressed countries…suppresses free speech and is auto immune from criticism.
“This is toxic and where the hostility comes from. Religion is totalitarian. Islam has become the new Nazism,” she said.

Another tweet, apparently sent in response to a news story posted by the radio station LBC, read: “Well how else do you expect to deal with this!? Parents will simply bang on about Islam and their rights blah blah blah. It confuses me so much why people with these views live in the West.”

A post from October, which “seemed to ridicule wearing the hijab”, according to News Shopper, said: “Such a lame attempt you made to justify hijabs. Self indulgent to think anyone would give a toot that you showed your hair.”

While Ms. Sunderland was suspended from the Conservative Party on Sunday night she will remain on the ballot for Thursday’s election, reports the BBC, citing a spokesman for Lewisham Council who noted that the controversy took place three weeks after the deadline for withdrawal.

Birmingham Islamic school accused of warning girls not to use tampons
An Islamic school which stocked books inciting domestic violence has been criticised for reportedly teaching pupils that tampons “may not be appropriate”.

A memo allegedly sent to teachers at Al-Hijrah School in Bordesley Green on the teaching of sex and relationships was leaked to The Sun.
According to The Sun, the document states: “Among the various types of pads, tampons may not be appropriate due to insertion."

Last year, the school was found to be in breach of the Equality Act 2010 for segregating boys and girls from the age of nine for all teaching and social time.
A 2017 Ofsted inspection found that this led to inequality in the subjects on offer for boys and girls.
The authority also found books in the library which “included derogatory comments about, and the incitement of violence towards, women”.
The report added: “Pupils had easy access to these, and leaders told inspectors that they did not know the books were there.”
Books found by inspectors said men are allowed to beat their wives as long as they don’t leave a mark.
A book called Islamic Family Guidelines said husbands are in “the position of leadership over the family” and “women have thus been commanded to obey their husbands and fulfil their domestic duties”.
One book appeared to condone marital rape, saying: “The wife is not allowed to refuse sex to her husband.”
Another said a wife “cannot go out of her husband’s house without his permission and without a genuine excuse”.

The school was rated “inadequate” and the Government stepped in and ordered the school to be run by an independent academy trust.

The school crossing guard in the realm of Sadiq Khan in London. 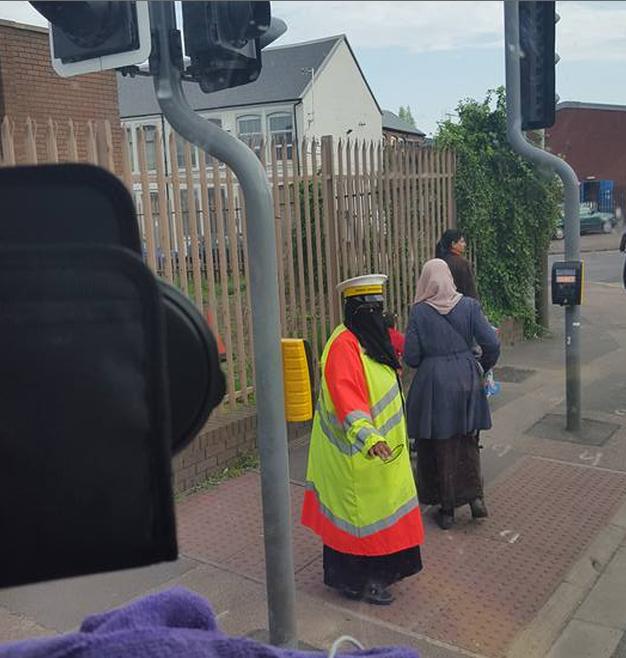 Ariel schreef:The school crossing guard in the realm of Sadiq Khan in London. 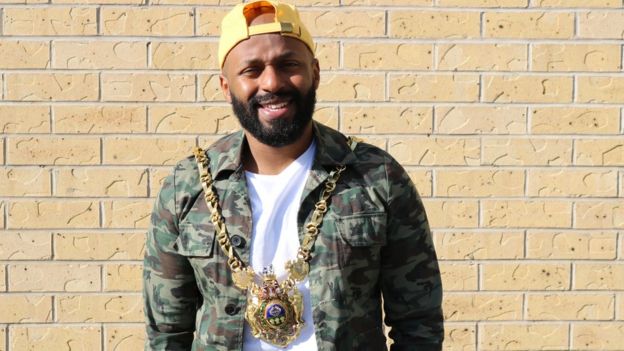 Sheffield’s New Muslim Lord Mayor: ‘I Wouldn’t Even Do a Toast to the Queen’

Sheffield’s new lord mayor Magid Magid, who entered politics to “fight xenophobia”, has declared the British monarchy “outdated” and said he would refuse to toast to the Queen.

“I hope by the fact I am a black, Muslim immigrant – everything the Daily Mail probably hates – people will look and say ‘In Sheffield we’re proud of doing things differently and celebrating our differences’,” he told The Star on Tuesday.

At 28, Magid became the city’s youngest ever lord mayor when he took on the ceremonial role on Wednesday, having moved to Sheffield from Somalia with his family when he was five years old to “look for a better life”.

Speaking of his role as Sheffield’s first citizen, which according to convention involves acting as a figurehead, meeting with important guests, and attending high-profile functions, Magid said he hopes to appoint rapper Otis Mensah as the city’s first poet laureate.

Describing the position of lord mayor “quite archaic”, however, the former Hull university student said he would like to “bring it into the 21st century”, asserting that “minority ethnic groups are doing amazing things in this city”.

Breaking away from tradition at his mayor-making ceremony, Magid had the Imperial March from Star Wars and then the Superman theme tune play as guests took to their seats, according to The Star.

Remarking on a state visit to Sheffield by the monarch in 2015, he said: “I believe we should have an elected head of state. I love the Queen, she’s hard-working and a lovely person – but the system is outdated.