The bid from the supermarket giant has upset Muslims living in the area, some of whom say they find the idea of alcohol being sold offensive.

Next Tuesday councillors will make a decision on the application, which, if successful, would see the store permitted to sell alcohol from 6am until 11pm every day (...)

A Muslim worker is suing Tesco for discrimination after being asked to transport beer on his forklift truck.

Mohammed Ahmed claims he was in eff­ect forced from his job because managers ref­used to accept that handling alcohol offended his beliefs.

The 32-year-old, raised in Saudi Arabia, told a tribunal he had never visited a Tesco store and had no idea it sold alcohol when he took on the role.

But he admitted shopping at Sainsbury's, Lidl and Asda and seeing alcohol on sale there.

It was, 'reason­able to expect him to be aware of what Tesco did', said company lawyer Laura Canham, accusing him of giving out mixed messages by suggesting at one point he could handle Budweiser.

The saga began in September last year, when Mr Ahmed, from Derby, started working at the retail giant's distribution depot in Lichfield, Staffordshire.

Realising the problem, Mr Ahmed said he asked for another role but was allegedly told by aggressive supervisors: 'You do the job or go home.'

He lodged a formal complaint in February but was then victimised and harassed, the trib­unal in Birmingham heard.

He left two months later, saying he had no choice but to resign 'in protest'.

'I am not saying I am a perfect person, but there was a conflict with my beliefs,' he said.

Miss Canham denied discrimination, saying: 'All other roles, in some form or other, also came into contact with alcohol.'

The tribunal will rule this week.

A woman was left embarrassed when a Tesco pharmacist refused to give her the morning-after pill because it was against his religious beliefs.

The mother-of-two was turned away from a branch of the giant supermarket chain by a locum pharmacist working within the store's dispensary.

While Tesco has apologised, it says the pharmacist was acting within his rights under an industry code of ethics.
Ruth Johnson, 30, whose youngest child was born four weeks ago, had not been using her usual contraception with her fiancé and asked for the pill Levonelle at her local Tesco.

She said: 'The pharmacist … told me that he would not be "allowing" me to buy the pill from him, because he had a right to refuse to sell it on the basis of his personal beliefs.

'The pharmacist was of Asian origin, so I asked him if it was because of his religion and he replied, "Yes."'

Following the incident Ms Johnson, of Cleethorpes, complained to the store manager.

She said: 'I was told that it had nothing to do with them and that they couldn't force the pharmacist to sell it, despite him working in their store.

A Tesco spokesman said the pharmacist advised Ms Johnson on other places to purchase the pill, but was acting within his rights to refuse to dispense it himself.

He said: 'We do apologise to Miss Johnson for the inconvenience caused.

'However, the Royal Pharmaceutical Society's code of ethics allows pharmacists the right to refuse.'

Ms Johnson, who thought the supermarket service would be more discreet than a local chemist, said she feared for any teenage girls who might be turned away from seeking the morning-after pill.

She added: 'I appreciate we live in a multicultural society, but what gives him the right to impose his beliefs onto me?'

A spokesman for the Royal Pharmaceutical Society of Great Britain (RPSGB) said: 'The Code of Ethics and Standards does not require a pharmacist to provide a service that is contrary to their religious or moral beliefs.'

But he added: 'Any attempt by a pharmacist to impose their beliefs on a member of the public seeking their professional guidance - or a failure to have systems in place to advise of alternative sources for the service required - would be of great concern to the RPSGB and could form the basis of a complaint of professional misconduct


Massoud Shadjareh, chairman of the London based Human Rights Commission said, “they would not have organized this at Christmas. It is equally stupid to organize it at Ramadan. It shows a complete lack of awareness and sensitivity. This is going to disadvantage the athletes and alienate the Asian communities by saying they didn’t matter.


Shaykh Ibrahim Mogra, an imam on the Muslim Council of Great Britain said, “I’m sure the athletes will seek advice from their scholars. They are obviously going to be at a disadvantage because other competitors will be drinking and keeping up their energy levels. They are athletes and I am sure they will train their bodies to cope with this.


Narrated Uqbah ibn Amir:
I heard the Apostle of Allah say: Allah, Most High, will cause three persons to enter Paradise for one arrow: the maker when he has a good motive in making it, the one who shoots it, and the one who hands it; so shoot and ride, but your shooting is dearer to me than your riding. Everything with which a man amuses himself is vain except three (things): a man's training of his horse, his playing with his wife, and his shooting with his bow and arrow. If anyone abandons archery after becoming an adept through distaste for it, it is a blessing he has abandoned; or he said: for which he has been ungrateful.[1]

The Dewsbury MP, who is currently a minister for international development, said he hoped to make Britain "a more just society" in his new role as a minister in the department for justice.
"While I have truly loved my international role working to deliver justice for the poorest around the world, I'm now relishing the opportunity to make Britain an even fairer and more just society for all its citizens," he said.

A TOUGH package is being drawn up by David Cameron to tackle Islamic extremism. One of the key proposals is to ban sharia law courts from operating in this country.


She said the party would abandon the “blind alley of multiculturalism, which has deliberately gone down the road of separation for its own sake.


Banning a string of groups blamed for encouraging Islamic extremism.

Working with other EU countries to change the Convention on Human Rights which has blocked the deportation of hate preacher Abu Qatada and others believed to be a threat to Britain.

Changing the school curriculum to encourage teaching of British values and make youngsters “proud of their country.”

Ben Summerskill, Stonewall's chief executive, said today: 'If I was a member of the Stock Exchange I would be wondering whether he is the right person to be chaplain in the opening years of the 21st century. We have talked to one or two gay people in the City and they would be perfectly happy if he were to go.'

When confronted over his comments yesterday at St Michael's Cornhill the rector claimed they were in jest.

He said: 'I wrote some satirical things on my blog and anybody with an ounce of sense of humour or any understanding of the tradition of English satire would immediately assume that they're light-hearted jokes. I certainly have nothing against homosexuals. Many of my dear friends have been and are of that persuasion.

'What I have got against them is the militant preaching of homosexuality.'

Nicola Beckley, who has been Mr Mullen's parishioner for the past 10 years, said: 'He's a great leader and doesn't cloud his views in political correctness.'

Minister who infuriated Muslims is put in charge of immigration policy
Muslim groups expressed anger last night after a Labour politician who has been at the centre of a series of race controversies was made Immigration Minister.

Phil Woolas, previously an Environment Minister, was handed the brief despite infuriating the Pakistani community earlier this year by warning they were fuelling birth defects by inter-marrying.

He also caused anger following the Oldham race riots by calling for 'the reality of anti-white racism' to be acknowledged.

Last night, the Muslim Public Affairs Committee condemned his appointment. A spokesman said: 'Phil Woolas has a track record of insensitive, inappropriate outbursts that have verged on Islamophobia.

'He is a Minister clearly out of his depth. We will monitor his work for any more signs of his all too obvious antipathy towards British Muslims.'

His appointment was part of a raft of junior ministerial changes announced by Gordon Brown yesterday, including rewards for MPs who led the famous 'curry-house' plot against Tony Blair.

The Steadfast Trust is the first and only registered charity which undertakes work specifically for the ethnic English community. It exists to promote the education, legal rights, welfare, and overall interests of the community within England. Our work is driven by the belief that the English, and in particular the young, would gain greater self-respect and self-confidence if they had a better appreciation and understanding of their unique culture and heritage.[...]
We believe that the English are a community like any other and that our Englishness should be promoted as something that is positive in our lives and the lives of our children. A strong sense of communal identity helps develop a strong sense of communal responsibility; it helps bring people together and counter the alienation from society that many feel. 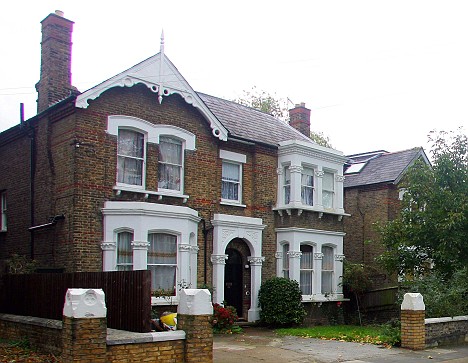 The house in Acton has seven bedrooms, two reception rooms, a dining room and two kitchens, as well as an extensive back garden.

Mrs Saindi's son, Jawad, 20, told the London Evening Standard: "If someone gave you a lottery ticket would you leave it? No. You take what you get given.

"It's not that we wanted this big house - my mum is not happy because she has to clean all of it. The first day we moved in here we got lost because it was so big."

He added: "It was a big choice to go to another country and we came here for the education for the little ones. It was great in Afghanistan, every house over there is enormous - this place would be as big as something we would give chickens but we are just grateful for what we can get."
De geest van de wijze richt zich naar rechts, maar de geest van de dwaas naar links.
Omhoog

MUSLIM INMATES GET NEW CLOTHES IF DOG SNIFFS CELL
Thursday October 9,2008
Muslim prisoners are being given fresh clothes and bedding after sniffer dogs search their cells – because they view the animals as unclean.

The inmates say their bedclothes and prison uniforms must be changed according to Islamic law if they have come anywhere near dog saliva.

Government rules mean warders are having to hand out replacement sets after random drug searches to avoid religious discrimination claims.

The dogs have also been banned from touching copies of the Islamic holy book the Koran and other religious items.

Prisoners are handed special bags to protect the articles.

Philip Davies, Tory MP for Shipley in Yorkshire, said: “Another way for people not to have their cells searched for drugs is not to commit crime in the first place. If you commit a crime and go to prison, there are certain things which you expect to happen.”

A leading imam, Ibrahim Mogra, said the policy was “very sensitive and sensible”.