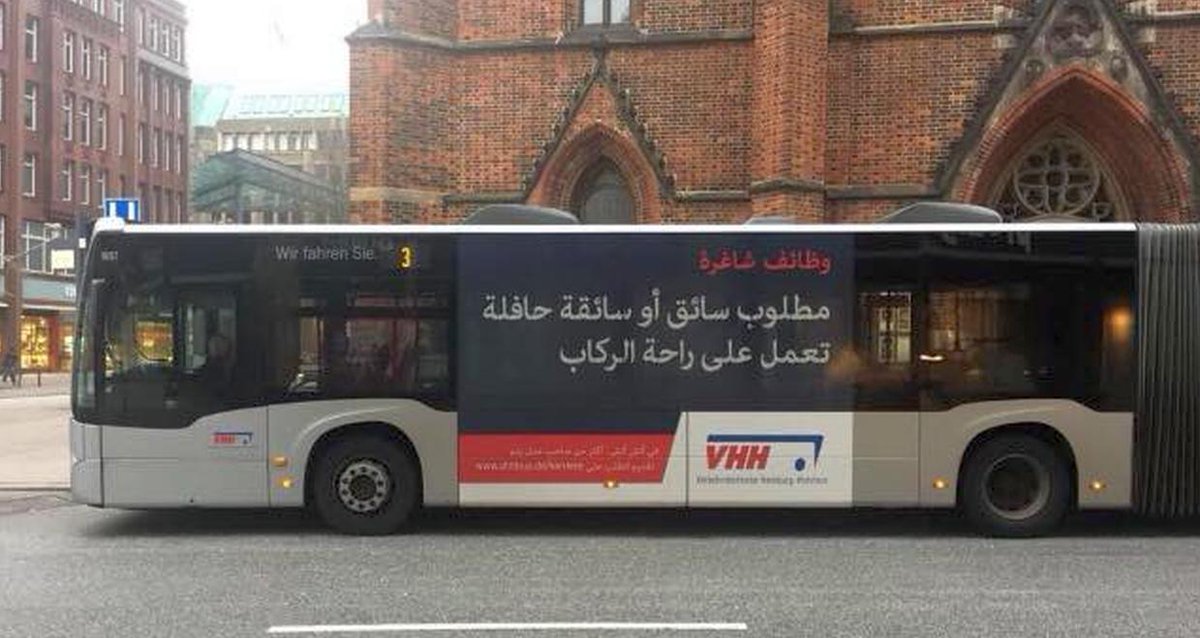 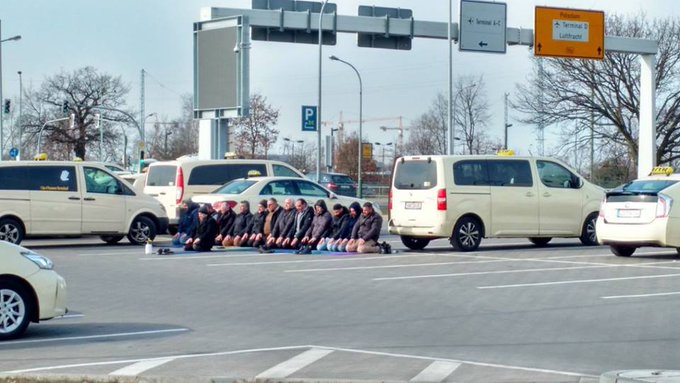 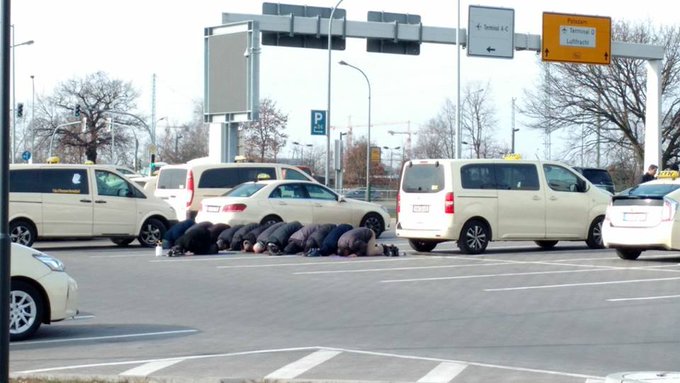 
A documentary about a Syrian family on Germany’s Spiegel TV has caused controversy in the country.


The 32-year-old Ahmad A. lives with his two wives and six children in the district of Pinneberg. His second wife was only thirteen years old when Ahmad married her in Syria.

While polygamy is banned in Germany, Ahmad was allowed to bring his second wife to Germany. The decision was based on the fact that she is the mother of four of his children.
Ahmad doesn’t understand the controversy, because he is a devout Muslim and follows the Sharia, which allows polygamy.

The family fled Syria’s capital Aleppo in 2015 via Greece, France and Denmark and is now completely living on benefits.

Ahmad says he always wanted to go to Germany and tells Spiegel Tv: “There’s support here. They give us social benefits, they give us this house.”

Ahmad is happy to be in Germany: “I thank you very, very, very much, Mama Merkel. She is the only person who has felt the suffering of the Syrians. I also thank the Germans, even if there are racists among them. But the Germans have experienced war and show great compassion for the Syrians.”

The case of Ahmad and his family isn’t the only one where polygamy is involved. Earlier we reported that 34 refugees imported 130 family members and second wives to Germany. There’s even a case known of one refugee who has 23 children and 4 wives.

"Vom Krankenwagen aus der Schule abgeholt“
After German daily newspaper “The Tagesspiegel” asked their readers to tell about incidents of school violence and bullying, they received a lot of replies.

“Our son is in fourth grade at a middle school and has been bullied since the first year. He was abused, beaten and kicked because he is German. Classmates call him ‘German pig’, ‘pig’ and ‘German potato’. At his school are mainly children with a migrant background. Most are Muslims,” one family says.

The boy and his family live in Berlin-Mitte, which is a multicultural neighbourhood, according to them. “We like to live there, we have a motley circle of friends. But our son being bullied and attacked for allegedly eating pork is simply unbearable for us. He does not even eat any, we are vegetarians.”

“In addition to countless insults that he has to listen to daily, our son was kicked down a staircase and beaten several times in the schoolyard – sometimes in front of the teacher. He was picked up from school by the ambulance more than once”, the family continues.

The boy once had to stay in a hospital for a weekend because a classmate had kicked him in the stomach and it was unclear whether any organs were injured, the family tells The Tagesspiegel. “There have been six incidents so far in just one year. We do not want to take this anymore

The Changing Face of the Country

Many Germans feel foreign in their own country and are afraid that immigration is changing their homeland rapidly. Every fifth person in Germany comes from an immigration background and that number will continue to climb. What does that mean for the country?


Maike Manz runs her hand across the patient's belly and hopes that the young woman in the hospital bed will at least have an inkling of what she's trying to tell her. "We're going to conduct an ultrasound now and then we will decide how to proceed," the gynecologist says, slowly and as clearly as she can.

The pregnant woman is from Guinea-Bissau and has only been living in Germany for the past nine months. She peers on helplessly as the doctor does a miming gesture to try to help her to understand. Adhered to her stomach is the sensor of a CTG device that measures babies' heart rates. She's in her 36th week of pregnancy and is expecting twins. Aside from the word "baby," she hasn't understood anything, because she doesn't speak any German.

Manz looks at her mobile phone display in the hopes it will provide some relief. It's quarter to five and the translator, a relative of the patient, was supposed to be here 45 minutes ago. She shrugs her shoulders. "Different cultures, different understandings of time," says Manz, who has worked at the maternity ward of the Mariahilf Hospital in Hamburg's Harburg district since last year.

During prenatal checkups and the actual birth, Manz, who is the chief physician here, always carries index cards with basic vocabulary in Arabic, Farsi, Russian, Romanian and Turkish. When she chooses new staff, Manz also tries to make hires that can help her department cope with the new challenges.

Indeed, that is one reason why Sufan Abdulhadi has become something of a star at the hospital over the past three years. The Libyan began his doctor residency in Germany in 2008 and he has been working at Mariahilf since 2014.

Abdulhadi is something of a bridge between the cultures. Arab families feel they're in good hands with Abdulhadi and it's easy for them to explain things to him. "I've spoken more Arabic here in recent years than German," he says. "It's unbelievably important for women who come to us that during the most important moment of their lives, there is a doctor nearby who can understand them."

Close to 40 percent of the mothers who give birth at Mariahilf were born outside of Germany. Harburg, where the hospital is located, is neither one of Hamburg's more prosperous areas nor is it particularly poor. The statistics are similar at many other big city hospitals around the country. In many parts of Germany, obstetrics has become a multicultural career field, with the unique challenges that come along with it.

The latest numbers from the Federal Statistical Office show that almost every fourth child born in Germany in 2016 had a foreign mother. Female immigrants are indeed contributing significantly to the fact that Germany's birth rate is rising again. Already today, one out of five people living in the country has immigrant roots.

Germany has obviously become a country of immigration - and one that is changing rapidly. And although economists and politicians are fond of emphasizing all the positive aspects of this development - Germany's aging society, for example, has been an issue for decades - there's also a large segment of society that is anything but pleased by the development.

These people are asking themselves what their heimat, or homeland, will look like in 10, 20 or 30 years. They harbor doubts that the government is able to solve the problems already arising out from the lack of integration among some immigrant groups. Some fear that German Chancellor Angela Merkel is leading the country toward a bleak future with an aimless immigration policy - a policy that allows migrants to come to Germany and apply for asylum rather than a policy that actively seeks to bring in highly skilled workers. A policy that ultimately means that even those whose asylum applications are rejected are ultimately allowed to stay anyway.

Such fears of uncontrolled migration are nothing new. They helped catapult populist German politician Thilo Sarrazin's 2010 book "Deutschland schafft sich ab," which can perhaps best be translated as "Germany Is Doing Away With Itself" to the top of the best-seller lists. But at the time when Sarrazin was promoting his theories about Muslim immigrants' fondness for procreation, only 40,000 new asylum-seekers were entering Germany each year. At the peak of the refugee crisis in 2015, that many people were arriving in the country within just a few days.

Swapping Out the Germans
Since then, just under 1.4 million refugees have arrived in Germany. One indication of how deeply the anger and rage are simmering in many people is the dangerous power of the conspiracy theory which holds that the chancellor, together with other sinister powers, is planning to swap out the ethnic German population and replace it with foreigners. Michael Butter, a professor of American Studies at the University of Tübingen, who is also an expert in conspiracy theories, says it is currently one of the most popular conspiracy theories circulating in Germany right now.

Part of the reason it became so popular is that society, politicians and the media haven't discussed some of the developments openly and factually - at times out of fear of playing into the hands of xenophobes. Too often, the debate is driven by people more focused on showing off their own worldliness and tolerance than actually addressing the problems. But hopes that the conflicts created through poorly managed immigration might somehow disappear behind the optimism have been dashed.

Large segments of the German population are suffering from a kind of stress relating to identity. Germans without any immigration background in their own families fear that immigrants could strip them of their Heimat, their sense of home. At the same time, Germans with immigrant backgrounds feel marginalized and foreign. But it's an altogether different phenomenon for refugees arriving here. When they think about home, it tends to be the one they just lost.

'Rampant Feelings of Rootlessness'
German Interior Minister Horst Seehofer of the conservative Christian Social Union (CSU), the Bavarian sister party to Merkel's Christian Democratic Union (CDU), reacted to that sentiment with his recent remarks that Islam doesn't belong to Germany. Of course, the sentence in and of itself is nonsense: Around 4.7 million Muslims call Germany home. Many were born here and are very well integrated into society. There's at least one mosque in almost every large city in Germany.

But even weeks after Seehofer uttered those words, the debate over his comments still hasn't abated. In fact, polls show that large parts of the German population agree with Seehofer. But why? Because saying "Islam doesn't belong to Germany" is a way of expressing discomfort with the ways in which the country is changing. A way of saying they would like the development to stop.

Merkel's answer to Seehofer, though, namely that Islam does belong to Germany, also isn't helpful, says Cornelia Koppetsch, a professor of sociology at the Technical University of Darmstadt. She argues that both politicians sought to "create a sense of community within their political camps," but ultimately ended up promoting "rampant feelings of rootlessness."

Germany is fond of such symbolic debates, which ultimately ony serve to determine which side people fall on rather than actually addressing the real issues at hand. There are constant debates over whether to ban the burqa, even though very few women actually wear them in Germany. These discussions serve largely to provide supporters of a ban with a vehicle with which to express their sentiment that tolerance has gone far enough.

As Christianity Shrinks in Germany, Islam Grows
The CSU has now promised worried Germans that the country will remain one shaped by Judeo-Christian traditions. At the same time, though, it's also true that membership in Christian churches in the country has been shrinking for years. In 2016 alone, 350,000 people left the church.

As Christian churches close in many places in the country, Muslims are building new mosques - or they are taking over buildings that are otherwise empty.

In Hamburg's Horn neighborhood, the Islamic Center al-Nour community is even in the process of converting a former church into a mosque with the help of funding from Kuwait. The church had been empty for more than 16 years with its members having either died, left the church or moved. Nobody is being pushed out. And it also provides the Muslim community with a convenient opportunity to make use of an empty space. Some nevertheless see the conversion as symbolic.