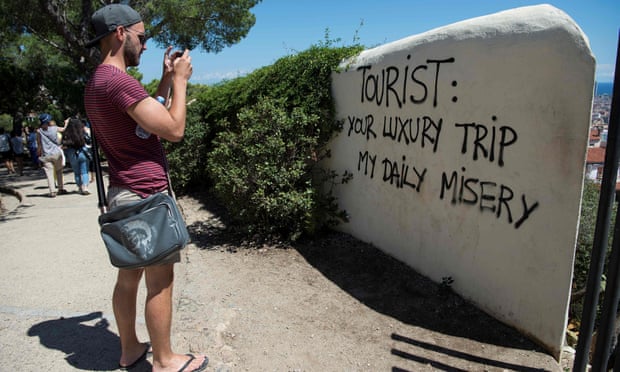 Early last year, around 150,000 people in Barcelona marched to demand that the Spanish government allow more refugees into the country. Shortly afterwards, “Tourists go home, refugees welcome” started appearing on the city’s walls; soon the city was inundated with protestors marching behind the slogans “Barcelona is not for sale” and “We will not be driven out”.

Is it really the case that Barcelona would prefer to receive thousands of penniless immigrants rather than the millions of tourists who last year spent around €30bn in the city? The short answer, it appears, is yes. Increasingly it is tourism, not immigration, that people see as a threat to the city’s very identity – though numbers of both have risen exponentially in recent decades. Close to 21,000 migrants have arrived in Spain by sea since the beginning of the year and 304 died in the attempt, the International Organization for Migration says.

The Libya-Italy Mediterranean route, which was the main one until recently, has dwindled by 80 percent while Spain has now become the main destination for migrants trying to reach Europe.

Migrants are also reaching Spain by land, with 602 managing to scramble over the double barrier between Morocco and the Spanish territory of Ceuta in North Africa last Thursday, throwing caustic quicklime, excrement and stones onto police below.

Borrell recognised that "this shocks public opinion and the disorderly nature of immigration produces fear."

But he said it was all relative, and "600 people is not massive compared to 1.3 million" Syrian refugees currently in Jordan.

"We're talking about 20,000 (migrants) so far this year for a country of more than 40 million inhabitants," the Socialist minister said. "That's not mass migration."

Borrell also said the arrivals were under control, even if NGOs are warning that many migrant reception centres in Spain are saturated.

He suggested this could even help Europe, where many countries have a low birth rate.

"Europe's demographic evolution shows that unless we want to gradually turn into an ageing continent, we need new blood, and it doesn't look like this new blood is coming from our capacity to procreate."

During two months in office, Socialist Prime Minister Pedro Sanchez has asserted his liberal credentials by offering to receive hundreds of migrants rescued in the Mediterranean, as the European Union struggles to agree on how to handle them.

The government said on Monday that it aims to invest 30 million euros in an emergency plan to manage the influx of migrants.

The money will go towards covering the initial costs of managing arrivals on the beaches, from staff to hand out blankets and food to managing the process of identification and determining whether people qualify for asylum, a spokeswoman for the Prime Minister's office said.

Sanchez's political opponents including the hard-line new leader of the conservative People's Party (PP) have warned against creating a "pull factor" for migrants seeking a better life in Europe.

"Rather than a pull factor, we could talk about a lack of foresight in the last years of the previous government, which did nothing about increasing arrivals, and obliged this government to take urgent steps," Sanchez's office said in a statement.

Sanchez's office said the previous government left Spain unprepared for the influx, which has totalled almost 24,000 so far this year, according to the United Nations refugee agency, almost as many as made the trip throughout all of 2017.