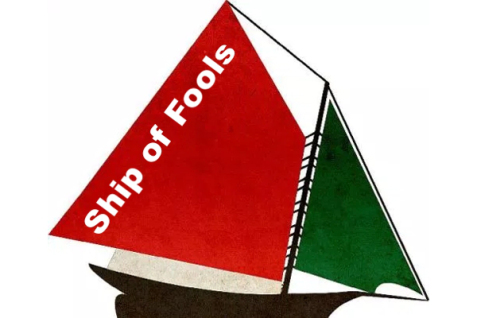 Prime Minister Netanyahu has penned a letter to be delivered to the Flotilla to Gaza activists, presumably to be handed to them as they are being towed to port.

Israel has made it clear that the Flotilla will not be allowed to reach Gaza directly by sea, but can land in Israel, and then send all their humanitarian aid through one of the established crossings into Gaza.

Welcome to Israel!
It seems you got lost. Perhaps you meant to sail to a place not far from here – Syria. There the Assad regime slaughters his people every day with the support of the murderous Iranian regime.

Despite that, here in Israel we are dealing with a situation where terror organizations, such as Hamas, are attempting to harm innocent civilians. Against attempts like these we are defending the citizens of Israel in accordance with international law.

Despite that, Israel assists with the transport of humanitarian supplies to Gaza – 800 truckloads a day, more than 1.6 million tons of supplies this past year. The equivalent of 1 ton per resident of Gaza.

By the way, the volume of equipment that has been sent from Israel to Gaza is more than 500,000 times larger than the your boats that you are arriving on.

Israel assists in hundreds of humanitarian projects via international organization including the establishment of medical clinics and hospitals.

But we are not willing to allow in weapons to the terrorist organizations in Gaza, as they have tried to do in the past, by sea.

Just a year ago, we stopped an attempt to bring in hundreds of weapons by sea, that were meant to harm innocent civilians.

There’s no closure on Gaza, and you are welcome to to transport, via Israel, any humanitarian supplies.

The sea blockade is in accordance with international law, and has received backing from the UN Secretary General.

If human rights were truly important to you, you wouldn’t be sailing in solidarity with a terror regime that executes, without trial, residents of Gaza, and uses the children of Gaza as human shields.

If you were to come to Israel you would be able to be impressed by the only democracy in the Middle East that is concerned with equality for all its citizens, and freedom of religion for all faiths. A state that operates in accordance with international law in order to provide its residents a secure life and its children to grow up in peace and serenity. 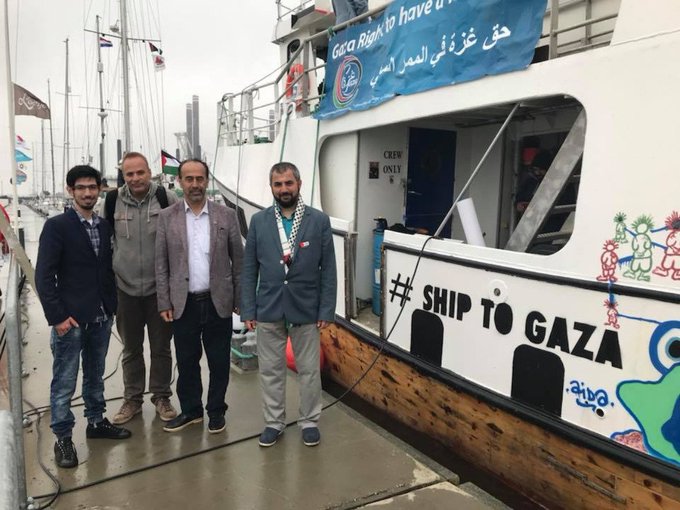 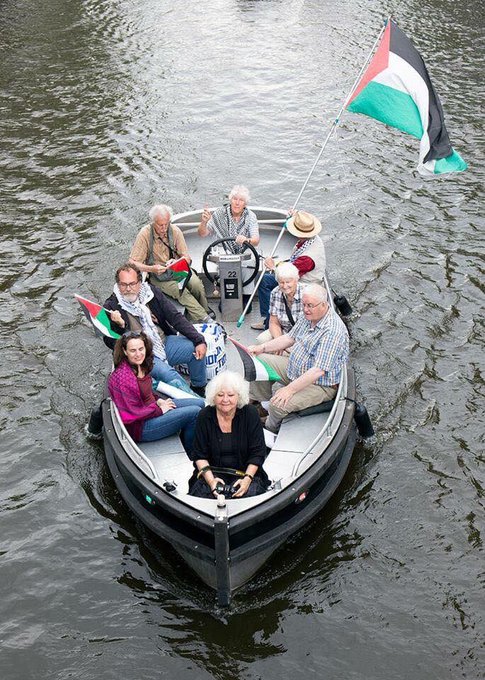 A candidate for the Swedish parliament suggested transferring Israeli Jews to the United States to achieve peace.

Oldoz Javid made the comment in an interview and subsequently asked that the line be retracted because the notion might be “misinterpreted.”

Javidi, an actor with Iranian roots who is a candidate with the Feminist Initiative party, said Tuesday that she had requested the retraction of the passage from an interview published Friday by the Feministiskt Perspektiv website.

“My unofficial opinion as an individual is a bit more fantasy based,” she said in the interview, which she gave while sailing with other pro-Palestinian activists in the direction of Gaza. She accused Israel of “stealing land” and livelihood from Palestinians and the United States of doing the same, presumably to Native Americans.

A new flotilla of ships intent on breaking Israel’s 10-year blockade of the Gaza Strip was due to set sail early this week from the Italian port of Palermo, two months after it first set off from Copenhagen in Denmark. 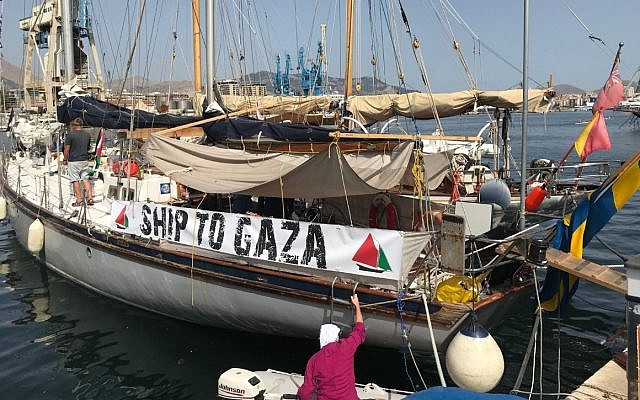 Organizers says vessel 'hijacked' and towed to Ashdod; IDF confirms it intercepted the boat, says it was in violation of blockade

The Israeli Navy on Sunday stopped a boat that was trying to break the maritime blockade of the Gaza Strip and started to tow the vessel to the port in Ashdod.

The “Freedom Flotilla” group said that the boat had been “seized” and that the ship had received a warning from the navy prior to the interception.

According to the group, the navy said it would “take all necessary measures” if the vessel did not adjust its course.

The IDF confirmed that it had intercepted the boat and was towing it to the nearby Ashdod port.

“The forces made it clear to the boat that it was violating the blockade and that any humanitarian supplies [it is carrying] can be delivered to Gaza through the port of Ashdod,” the military said in a statement. “The activity ended without any unusual incidents.

The “Return” (al-Awda) is one of two vessels making up the flotilla, alongside “Freedom.”

The flotilla was organized by the Freedom Flotilla Coalition, an umbrella of organizations aiming to end the closure of Gaza, and set sail from the Danish port of Copenhagen.

Those on board the ships include Prof. Ismail Nazari, chairman of Malaysia’s boycott Israel campaign; Charlie Andreason of Sweden, who spent time in Israeli detention for his role on the Marianne, a Swedish-flagged trawler leading a flotilla of boats in June 2015; Spanish Jewish activist Zohar Shamir Chamberlain; and Heather Milton-Lightening, an activist for indigenous Canadians.

The flotilla’s two-month journey saw the ships stopping off at several European ports to take part in activities supporting the Palestinians’ so-called “March of Return.”

It is under the “March of Return” banner that more than 100 Palestinians and one Israeli have been killed in violent clashes with Israeli security forces along the border fence since March 30.

Most of the Palestinians killed were members of the Hamas terror group, according to the group itself.


Teargas canisters fired by Israeli troops fall over Palestinians during a protest at the Gaza Strip’s border with Israel, Friday, July 13, 2018 (Wissam Nassar/Flash90)
Hamas has promised Gazans that they will “return” to homes in what is now Israeli territory. The Palestinians claim that tens of thousands of original refugees, displaced at the time of Israel’s creation in 1948, and their millions of descendants, have a “right of return.”

Israel will not agree to such a “return,” which would see a Palestinian majority outnumbering Jews and effectively bringing an end to the Jewish state.

Israel has imposed a blockade on Gaza since Hamas, which is sworn to Israel’s destruction, seized the territory from the internationally backed Palestinian Authority in 2007. It says the blockade is in place in order to prevent weapons and other military equipment from entering the Strip.

Critics point to worsening humanitarian conditions in Gaza and say the blockade amounts to collective punishment of the two million Palestinians living there. There have been many reports that the coastal strip is “on the verge of collapsing,” and could plunge into a new round of fighting with Israel if conditions do not improve. 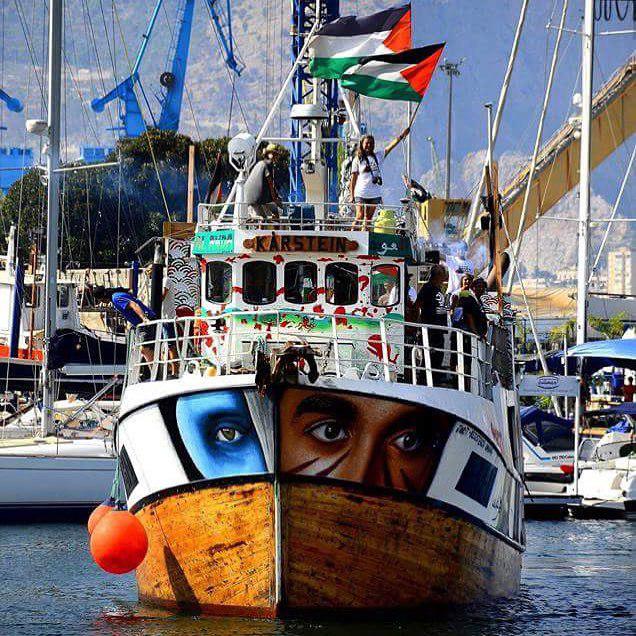