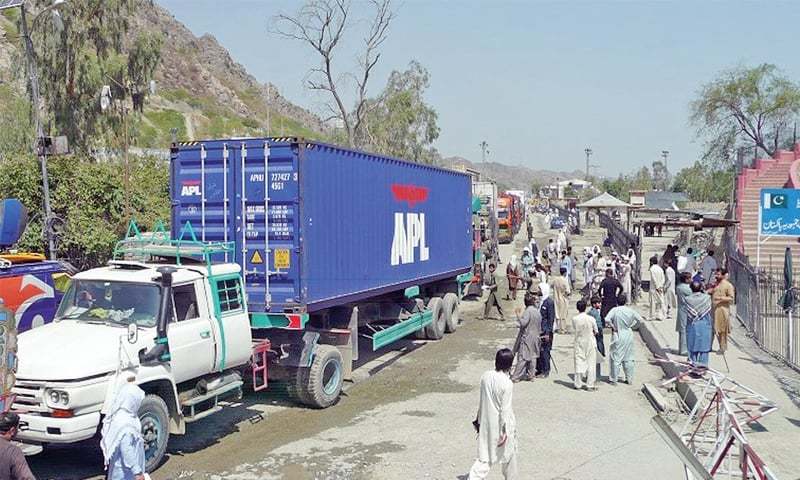 Stranded Afghans take shelter in mosques, shops near Torkham
Pakistani authorities allowed 3,915 Afghan nationals to go back to their country via Torkham border on April 28 as a gesture of goodwill. Authorities, however, had not made any formal announcement about the opening of Torkham border for return of Afghans on that day.

Hearing about the unannounced return of their countrymen, hundreds of more Afghans flocked to the border crossing with the hope of going back to their country. Pakistani authorities, however, closed the border and the Afghans, who had come to Torkhum, got stranded near the border.

The desperate Afghans, hundreds in number, took temporary shelter in two mosques at Landi Kotal Bazaar and abandoned railway tunnels on railway track leading to the border point.
[...]
Enzar Gul, anther elderly person from Kabul, said that some of them spent the first night under open sky without having any food for nearly 48 hours. He said that some of the stranded Afghans even approached their country’s consulate in Peshawar but to no avail.

He appealed the Pakistani border and security authorities to allow them to go back to their country.

India will be keenly watching the outcome of the Pakistani brainwave “to call a meeting of the Islamic countries that are ready to stand with us on the issue of Kashmir and support the oppressed Kashmiris,” as Foreign Minister Shah Mehmood Qureshi stated in Islamabad on August 4.
[...]
Suffice to say, Qureshi’s threat to Saudi Arabia stems from the frustration that it could do nothing more than the renaming of Islamabad’s Kashmir Highway as the “Road to Srinagar” and the unveiling of a “new map of Pakistan.”

[...]
Meanwhile, Qureshi did not seem to factor in that the Organization of Islamic Cooperation (OIC) is the diplomatic platform on which the Custodian of the Two Holy Mosques, King Salman, exercises leadership of the Ummah. Other than oil, it is that title that prompts the world community to take Saudi Arabia seriously.
[...]
The Pakistan-Saudi relationship has been in some drift lately. There are telltale signs: Pakistan reportedly scrambled to pay back a hefty Saudi loan even ahead of time; the Saudis have not cared to renew the deal for supplying oil to Pakistan under deferred payments; again, nothing seems to have moved on the grand idea of US$10 billion worth of Saudi investments in the Pakistani economy, either. Pakistani Christian, jailed for seven years, sentenced to death for refusing to convert to Islam
In the depths of a squalid Pakistani jail cell – kept far from the rest of the inmate population at Lahore's District Prison – a poor Christian factory worker is awaiting execution.

A judge convicted Asif Pervaiz, 37, of blasphemy and he was sentenced to death earlier this month. Those advocating for Pervaiz's innocence claim it was not blasphemy and that he merely refused to buckle to pressure and convert to Islam.

"This is a tragic situation; the first case in Pakistan's recent history where a Christian has been accused of blasphemy for refusing to embrace Islam," Pervaiz's attorney, Saif Malook, told Fox News. "This man, Asif's boss, wanted him to leave Christianity, and Asif knew he would suffer a lot by saying no. But he kept his faith."

Pervaiz's nightmare began in 2013 after his supervisor, Muhammad Saeed Khokher, at the garment factory where he worked allegedly pressured him to become a Muslim on multiple occasions, according to Malook. When he refused, Khoker went to police with allegations that the devoted Christian had sent him "blasphemous" text messages defaming the Muslim Prophet Muhammed.

Khokher has since denied that he had attempted to compel his work subordinate to convert. In Pakistan, insulting the Prophet carries a mandatory sentence of capital punishment, and the court has vowed that Pervaiz will be "hanged by his neck until death."

However, the defendant has firmly dismissed the claims, and his attorney further contended that at the time, some seven years ago, anybody could purchase a phone SIM card without showing identification. While legislation has since become tougher and chips now require registration in Pakistan, anybody could simply claim a text message came from a person without verifiable proof.

Malook is preparing to appeal the death sentence, yet he has cautioned his client that the process will mean many more years ailing behind bars.

"As a person, Asif has always been a special young man – very strong, and he never wept until this month when they sentenced him to death. Mentally, he is feeling broken," his lawyer continued. "I've told him that he must find his strength – it is a long journey ahead, that he will not survive unless he can stay strong. I wanted to lie and tell him it would be over soon, but it will be many more years of fighting."

Malook also boldly took on the Asia Bibi case in Pakistan, the impoverished Christian woman who was also convicted of blasphemy. Her case languished on death row for almost 10 years through a long series of appeals and threats before finally being freed in October 2018. Months later, she quietly fled her homeland to the relative safety of Canada as protests over her acquittal erupted in the streets.

And in cases like Pervaiz, it is not just the accused who suffer.

His beleaguered wife – who was diagnosed with cancer – and four young children remain in hiding. Since his arrest seven years ago, they have struggled to find food and any means of income – relying on pennies from local Christian charities for survival.

Watching from behind iron bars as his family falls apart is eating away at Asif's sanity, Malook noted.

"His wife is still very sick, almost like a skeleton, and she fell down and collapsed at the prison while we met with Asif," Malook said on Friday, just hours after returning from the meeting. "The children were weeping for their father; they are all under threat. Everyone is scared to be around them; they are a poor family as it is. It was just so sad."

International human rights bodies have long warned that in Pakistan, unmerited accusations of blasphemy continue to imperil lives – and not only within the minority Christian population. As Malook observed, most of the country's blasphemy charges are directed at Muslims.

Last month, Amnesty International underscored an "alarming uptick" in such charges and stressed that the "draconian laws that enable abuse and risk lives must be repealed."

"They have been used to target some of the most marginalized people in society, including children, individuals with mental disabilities, members of religious minorities, and poorer people," the Amnesty report stated. "Though the majority of those accused are Muslim, as 98 percent of Pakistan's population adheres to Islam, critics have argued that the laws disproportionately target minorities such as Christians and Hindus, who are falsely accused due to discrimination rather than guilt."

The stringent laws regarding religion date back to 1860 when they were first endowed by India's British rulers, and broadened in 1927. Pakistan automatically acquired the harsh legislation when the country was birthed after a 1947 separation from India.

It was not until the 1980s when such offenses started to sweep through the Pakistani population, under the reign of General Zia ul-Haq, who endeavored to further "Islamize" the laws on the books with numerous clauses. In 1980, it was declared that the crime of making disparaging remarks concerning Islamic personages carried a three-year prison term. Two years later, a life prison term was mandated for anyone found guilty to "willful" defilement of the Koran, and then in 1986, it was recommended that blasphemy – the act or offense of speaking sacrilegiously about the Prophet – come with a death sentence.

According to the National Commission for Justice and Peace (NCJP), a total of 776 Muslims, 505 Ahmedis, 229 Christians and 30 Hindus have been accused under various clauses of the blasphemy law between 1987 and 2018 – with the overwhelming majority charged with desecration of the Muslim holy text rather than fully fledged blasphemy.

But even without formal judicial proceedings, the charges come with the cost of human life. In July, a 54-year-old man, Tahir Ahmad Naseem, who had mental disabilities, was shot dead in the Peshawar High Court as he was being presented for trial on blasphemy allegations.

The 2020 report released by the United States Commission on International Religious Freedom (USCRIF) in April recommended that the State Department redesignate Pakistan, a military ally of the U.S., a "country of particular concern (CPC)" given that "in 2019, religious freedom conditions continued to trend negatively."

"The systematic enforcement of blasphemy and anti-Ahmadiyya laws, and authorities' failure to address forced conversions of religious minorities – including Hindus, Christians, and Sikhs – to Islam, severely restricted freedom of religion or belief," the report surmised.

While amending the dated blasphemy laws has routinely been touted as a top priority for a number of Pakistan's secular political parties seeking dominance in Islamabad, little headway has been made over the years due in large part to the sensitivity surrounding the hot-button issue.

And for the likes of Pervaiz, it means falling into the field of the forgotten.

"A Pakistani prison is not a good place when you can't afford to pay the guards any bribes. You can't breathe properly, and the Christians charged with blasphemy must be held separately; otherwise, they will be killed," Malook added. "It has been seven years in the prison for Asif already, and there will be many more as we fight his execution. We need the help of the western Christian world."

Police said the shooting happened a day after the two allegedly had a heated discussion over a religious matter.
The attacker, identified as Professor Farooq Maad, and another gunman opened fire on the car of Professor Naeem Khattak as he was driving to his college, according to police official Siraj Ahmad.

Professor Khattak belonged to the minority Ahmadi faith, which was established in the Indian subcontinent in the 19th century by Mirza Ghulam Ahmad, whose followers believe was a prophet.
Police said Khattak was killed by a fellow professor and another man a day after they had a verbal brawl over religious issues.
The victim and the attacker worked at different colleges.

Saleem Uddin, a spokesman for Pakistan's Ahmadi community, said Khattak had completed his doctorate in Zoology and was facing problems because of his faith.
In a statement, he said Khattak had received threats and he demanded protection for people belonging to their community.
'The government has failed in providing protection to Ahmadis,' he said.
Without directly naming the military, he urged state institutions to ensure the protection of Ahmadis.

Maulana Adil Khan was the principal of Jamia Farooqia. His death follows sectarian tensions in Pakistan over the cursing of Sahaba during Muharram and several anti-Shia marches that followed.

Although officials are blaming India for the murder many people on the street and on social media are blaming “Shia militants” for the killing although at present there is no evidence for this.
[...]
Prime Minister Imran Khan said in a tweet: “Condemnable targeted killing of Maulana Adil of Jamia Farooqi in Karachi this evening. My government has known and I have repeatedly stated this on TV, since last 3 months [that] India attempts to target kill Aalims from Sunni and Shia sects to create sectarian conflict across the country.”