VIDEO Benjamin Netanyahu: “We stand with you!”

Many reports of peaceful protests by Iranian citizens fed up with regime’s corruption & its squandering of the nation’s wealth to fund terrorism abroad. Iranian govt should respect their people’s rights, including right to express themselves. The world is watching! #IranProtests

Iran, the Number One State of Sponsored Terror with numerous violations of Human Rights occurring on an hourly basis, has now closed down the Internet so that peaceful demonstrators cannot communicate. Not good!

Big protests in Iran. The people are finally getting wise as to how their money and wealth is being stolen and squandered on terrorism. Looks like they will not take it any longer. The USA is watching very closely for human rights violations!

Iran is failing at every level despite the terrible deal made with them by the Obama Administration. The great Iranian people have been repressed for many years. They are hungry for food & for freedom. Along with human rights, the wealth of Iran is being looted. TIME FOR CHANGE!

Iran regime will use 'all necessary force' to suppress protests, says expert

As protests in Iran entered their fifth day and with 10 demonstrators killed on Sunday night, questions are being asked about the nature of the protesters and the durability of the Islamic regime in Tehran in the face of popular demonstrations.

Speaking to The Jerusalem Post on Monday, Dr. Raz Zimmt, a research fellow at the Institute for National Security Studies (INSS) who specializes in Iran, pointed out the differences between these new protests and those witnessed in 2009, after the presidential election in which Mahmoud Ahmadinejad was reelected.

Zimmt noted that the current protests are occurring in much more geographically diverse areas than those of 2009, which were focused on Tehran. Demonstrations this time are being staged across the country in cities such as Mashhad, Isfahan, Tehran, Qom, Kermanshah, Bandar Abbas, and beyond.

He also said that the protesters now are from a more-diverse spectrum of the socio-economic scale than in 2009, and include people from the less-affluent working classes in addition to students and members of the middle class.

When the recent protests began, they were focused on economic concerns, such as the rising prices of basic goods, specifically eggs, and it is these issues which have attracted working-class protesters, said Zimmt.

He noted that although Iran’s economy has generally been improving of late, and GDP has been on the rise, there is what Zimmt described as “a crisis of expectations,” since the improvements have been confined to the macro level and have not yet led to a rise in living standards or more jobs.

Iran is suffering from an unemployment rate of at least 12% – the regime’s official statistic – and is likely much higher, including 30% youth unemployment.

“After the nuclear deal, people expected better economic conditions to transpire. And this hasn’t happened, largely because most Western companies didn’t enter the economy – partly in fear of US reaction and partly because the Iranian economy still suffers from severe structural deficiencies – such as corruption, a weak private sector, and the heavy presence of the Iranian Revolutionary Guard Corp... all of which make the economy less attractive for foreign investment,” said Zimmt.

He also pointed to a recent budget presented by President Hassan Rouhani as a possible trigger of the current round of protests. That led to an increase in the price of basic foods, and is set to increase the price of gasoline, as well as significantly hike a tax on foreign travel.

Meir Javendanfar, an Iranian-Israeli author and lecturer on Iranian affairs at the IDC in Herzliya and researcher at the Meir Ezri Center at Haifa University, said that despite the geographical spread of the protests, it was hard to know exactly the level of opposition to the regime among the general population.

But, he noted, the chants and messaging at the protests very quickly changed from focusing on economic concerns to those of a political nature.

“Judging by the chants, it seems to me they’ve lost faith in being able to bring much-needed economic reform without having complete root canal treatment of the political system, which basically calls for the regime to be removed,” said Javendanfar.

He concurred with Zimmt in the much-greater participation from the lower strata of the socio-economic scale in the current protests, and opined that it was likely that the primary concern was related to their economic situation, not political rights.

“The majority of people want to have a democratic system which brings them security, including economic security. Others don’t care if it’s democracy or a dictatorship, as long as it brings them economic security. Some are interested in Western-style democracy, but above all, people are concerned about the economy,” said Javendanfar.

“Now, however, they’re addressing political rights because they realize without political rights you can’t have economic reform.”
The other major contrast with the 2009 protests is that there are no discernible leaders who called for the protests. Zimmt described the demonstrations as “leaderless, spontaneous and popular.

This, he said, has advantages as well as drawbacks.

On one hand it means the protests can become ethnically and socially diverse, as they have already done, while also making them harder to suppress, since there is no pressure-point the regime can target.

The demonstrations being geographically diverse, as opposed to centered on Tehran as was the case in 2009, also makes suppression more difficult.

However, the leaderless nature of the protests creates problems down the road, said Zimmt. He compared the situation to the protests in Tahrir Square in Egypt in 2011, which eventually brought down the Mubarak regime but led to the rise of the Muslim Brotherhood, because they were best organized to take advantage of the power vacuum.

As to the likely success of the protests, Zimmt said he did not perceive the Iranian regime to be in any immediate danger.

He added that it was likely, if pressed, the regime would go as far as necessary, including using fierce and violent repression to preserve its grip on power.

“The regime has already proved itself as determined and ready to use all force necessary to suppress mass protests, as we saw in 2009, when there was a much more serious threat, with hundreds of thousands of protesters in the streets,” he said.

“So far, we haven’t seen the most aggressive methods of suppression, we haven’t seen live fire, apart from in two instances, which demonstrates that the situation isn’t so dangerous at the moment. But I have no doubt that if the situation becomes more extreme, and tens or hundreds of thousands of people go to the streets, then we know that it is the unambiguous goal of this regime to survive, and they’ll do everything they can to do so.”

How many of the guns used to murder innocent Iranian protesters were purchased with the $1.7 Billion in Cargo Cash shipped to the Iranian dictatorship by Barack Obama? 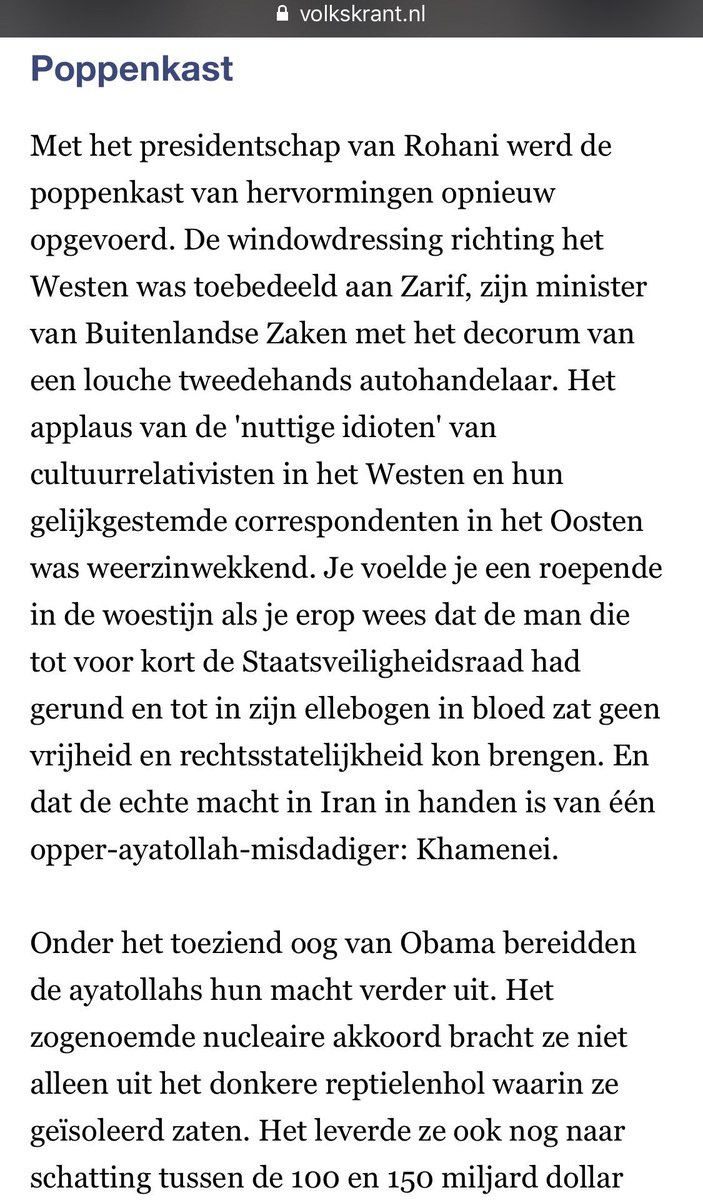