Tommy is back... stronger than before! 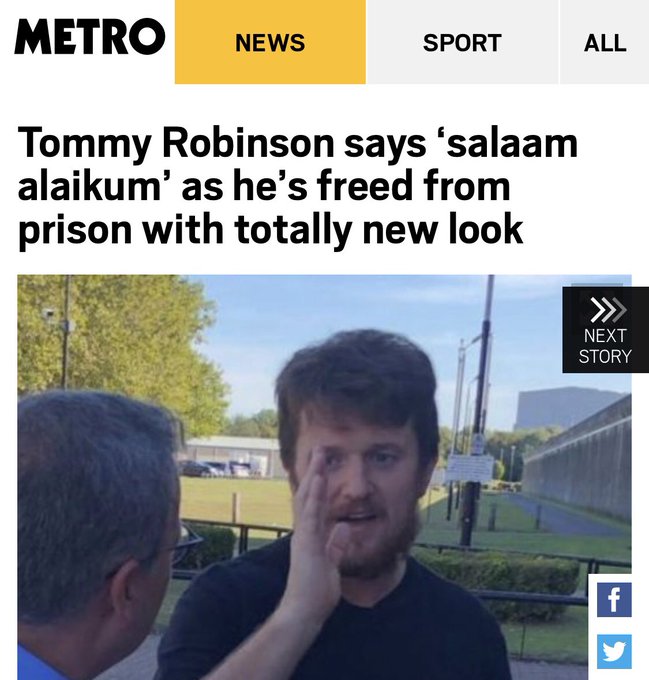 Wat een corrupte bende in GB.
URGENT: Tommy is BACK IN COURT tomorrow and I'm heading to the UK right now! | Ezra Levant

Posted by Martien Pennings in Uncategorized

“I want to update you on a couple of things that are going on behind the scenes in my world. Police-officers were dispatched to a house they believed to be mine from West-Yorkshire. My crime, as they see it, was reporting on the majority-Pakistani grooming gangs who had just appeared in Leeds Crown Court. I reported information that was already in the public domain. I reported information that had been already produced and reproduced by a major national newspaper together with names and photographs and I posted that information without personal comment. However, I was told if I did not remove the information I had posted ( . . .) I would be referred to the Attorney General under section 4 of the Contempt of Court Act. And of course the gentleman behind all of this ( . . .) was judge [Geoffrey] Marson.

“Now you remember his name perhaps: he is the same judge who threw Tommy Robinon in prison for contempt of court without due process, something that was overturned on appeal. So it was that same judge that sent police-officers ( . . .) to try to intimidate me and force me to remove the post that I had made of that information already in the public domain. Those men in court have now found to be guilty of the sexual assault on and abuse of our white young girls. Six of them were jailed and actually, as it turned out, one of these men ( . . .) has 8 years in jail but is not in jail because he is absconded to Pakistan. I suppose there is the madness of my country right now, where our white young girls are being raped and the men who were doing the rape were able to escape without going to jail. And yet I am the one with police-officers showing up and threatening me with contempt of court from a judge who already threw someone [Tommy Robinson] in jail without due process. These are truly crazy times.”

The "Judge" who jailed Tommy Robinson

Sources claim that "Judge" Geoffrey Marson QC, when informed that due to the presence of muslum gang members in prison, a 13 month jail sentence would likely be a death sentence, replied, "he knew what he was getting himself into". We can only speculate if "Judge" Geoffrey Marson QC, understands what he has got himself into with his Orwellian abuse of power.
Het morele gelijk ligt bij het volk

TommyRobinson attacked whilst defending an old couple after 3 young youths thought it was funny to cough in their faces, well done Tommy,