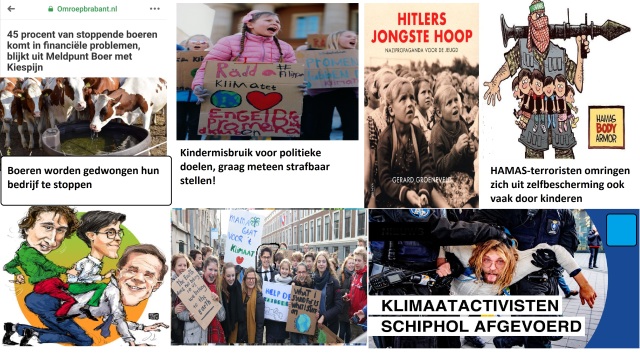 THE WAIT IS OVER: Greta Inc. is now LIVE on YouTube!

Her canonization as a climate saint was coordinated and executed by a cabal of left-wing eco-elites — including her parents and their famous friends.

But no-one has bothered to dig deep into Greta’s background… Until now. 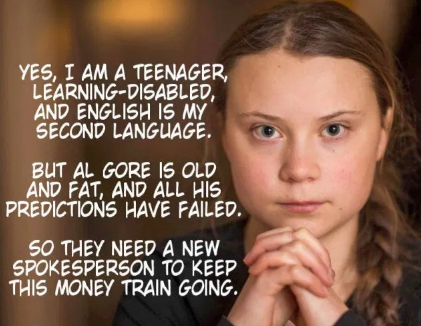 Greta Thunberg on Friday organized the climate protest “Fridays for Future“ in central Stockholm. To attract participants, the PR team behind the climate alarmist had invited two crime-glorifying rap artists, one of whom has served a prison sentence, Samhällsnytt reports.

Isabelle Axelsson who is a collaborator at the Fridays for Future project defends the invitation of the artists, and says that they want individuals who “reach out to the public“.

“We hire artists that we think will reach people and have something to say. It feels good, things are coming along. We have had ten thousand participants on similar events, but now there are fewer because of the February weather”, Axelsson told Expressen.

The artists 1.Cuz and Greekazo are well-known in some circles and generate millions of views on both YouTube and Spotify. Both artists’ lyrics and music videos are exclusively about gang-related crime, drug trafficking, and police hatred.

In an interview in early February, the masked 1.Cuz said that he has served two years in prison after committing a felony. What he was convicted of – he doesn’t want to reveal.

“It is a serious crime with a severe punishment. It is a long time that you are away“, stated 1.Cuz.

On stage, Greta spoke about her views on how climate issues are handled by those in power. According to Greta, the “crisis“ is ignored even though she believes there is research.

“The climate crisis is still largely ignored, despite the fact that the research is crystal clear. There is no real insight into the seriousness anywhere, it seems“, she said. 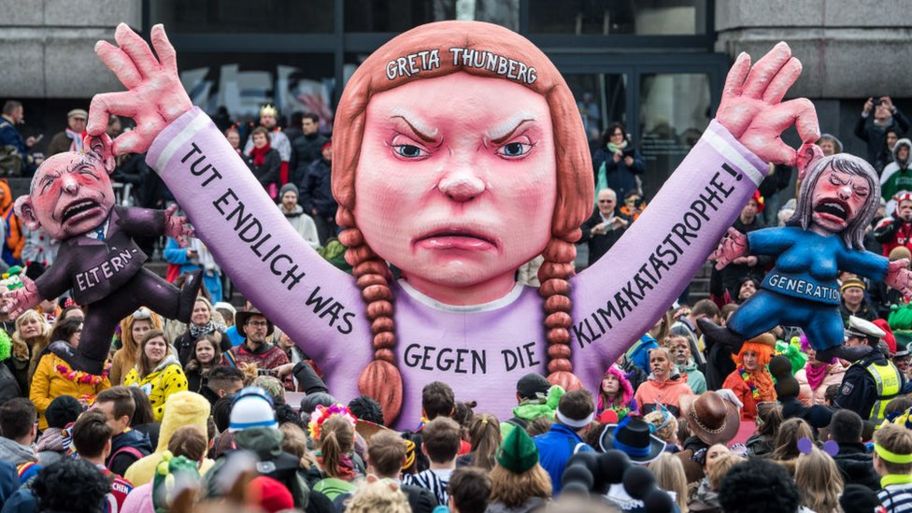 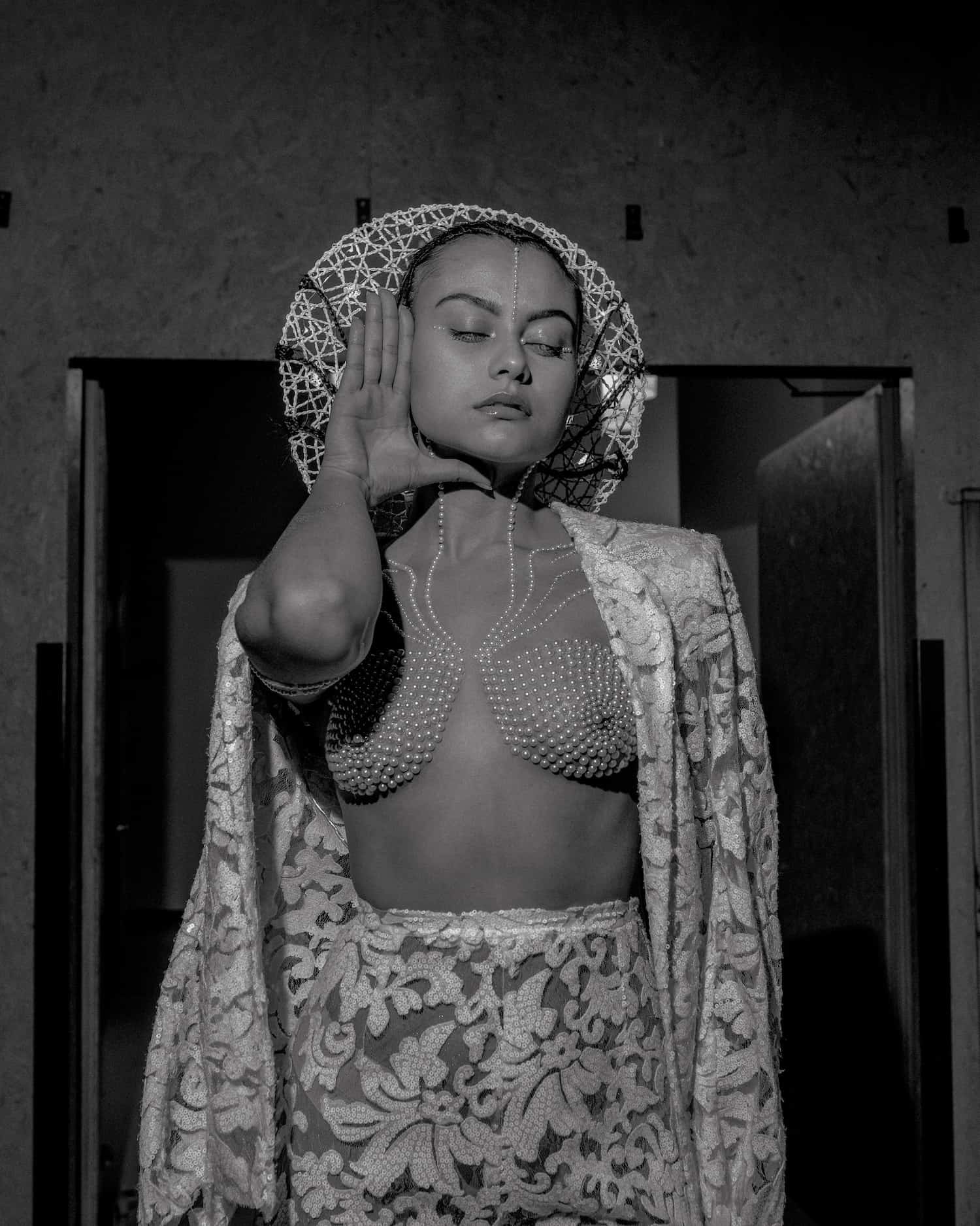 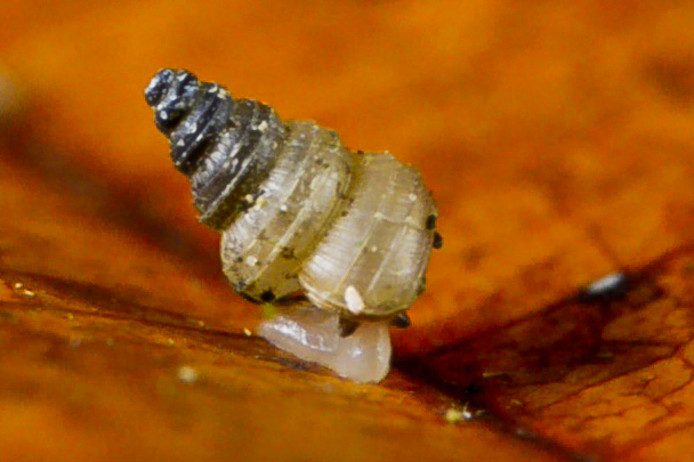 The teenager was welcomed by chants of "Greta, Greta" as she addressed some 15,000 people at the Bristol Youth Strike 4 Climate (BYS4C) event.

She accused politicians and the media of ignoring the climate emergency and "sweeping their mess under the rug".
"We are the change, and change is coming whether you like it or not," the Swedish environmentalist said.
Greta was speaking at the climate strike event on College Green, before leading a march through the city.
Wet weather failed to deter thousands of people turning out for the 17-year-old, who appeared on stage at about 11:45 GMT.

"Our leaders behave like children so it falls to us to be the adults in the room. They are failing us but we will not back down," Greta told the crowds.
"It should not be this way but we have to tell the uncomfortable truth. They sweep their mess under the rug and ask children to clean up for them.
"This emergency is being completely ignored by the politicians, the media and those in power.
"Basically, nothing is being done to halt this crisis despite all the beautiful words and promises from our elected officials.
"So what did you do during this crucial time? I will not be silenced when the world is on fire."
"Activism works so I'm telling you to act," she said. "We are being betrayed by those in power."

Greta walked at the front of the crowds behind a green banner reading Skolstrejk for Klimatet, which translates from Swedish as School Strike for Climate.
Protesters of all ages, including youngsters dressed as the activist, waved flags, placards and banners throughout the march.

Annie, a 21-year-old Bristol University student, was of the many people who turned out to hear the headline speaker and took a day off from her studies to participate.
"This is probably one of the most important things that we should be focussing on right now. Showing support and that you want change will make people higher up realise that as well.
"One day off school is a good enough sacrifice for what this is standing for. It's just one day, it's not going to do any harm."

Jerry and her baby, Leon, were also among those who joined the throng of people.
"What an absolutely wonderful experience. Everyone was really respectful and there were loads of lovely teens passionate about climate."

Sisters Alannah and Lottie Hoey, 10 and eight, travelled from Henleaze with family to be part of the day.
"I wanted to go and see Greta because she's very inspirational and does so much good for the planet," said Lana.
Lottie added: "We want a nice planet when we grow up so it's important to do things like Greta."
Greta had originally intended to visit London, but the area planned for the protest in the capital was considered too small so organisers recommended Bristol instead.

Police said 15,000 are in attendance, although organisers believe the figure is closer to 30,000.
BYS4C said it had drafted in more than 80 stewards and has a sectioned-off a "safe zone" for young children as well as an accessibility area.

Mya-Rose Craig, the youngest person to be awarded an honorary doctorate from the University of Bristol, spoke to the crowd before Greta's arrival on stage.
She said: "Greta, welcome to our amazing city and thank you for being with us today. We have to engage with all of our communities in order to properly fight climate change.
"An unequal world can never be a sustainable one."
Two years ago, Ms Thunberg started missing lessons on Fridays to protest outside the Swedish parliament building, in what turned out to be the beginning of a huge environmental movement.
She has since become a leading voice for action on climate change, inspiring millions of students to join protests around the world. 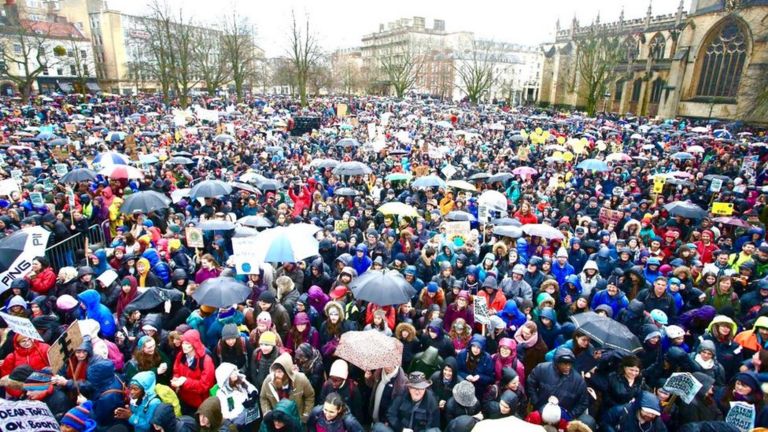 "Our leaders behave like children so it falls to us to be the adults in the room. They are failing us but we will not back down," Greta told the crowds.
"It should not be this way but we have to tell the uncomfortable truth. They sweep their mess under the rug and ask children to clean up for them. 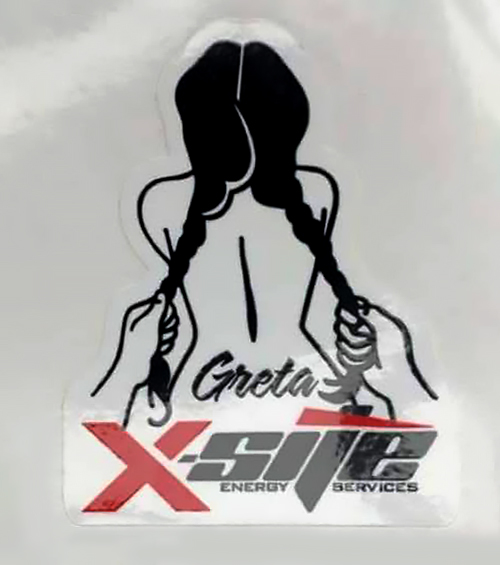