Gepubliceerd op 30 aug. 2013
Please note this is not about halal food. As Q Society's spokesman Andrew Horwood points out: "Halal food itself is not of concern to us. Nearly all our food is naturally permissible to Muslims and observant Muslims can make food of unknown origin halal by proclaiming 'bismillah' over the food before eating.*

What is of concern are the recently invented certification schemes, designed to permeate the supply chain from feeding trough to super market shelves and restaurant kitchens; including many non-food goods and services."

According to meat industry groups and research, two thirds of chicken and lamb meat and over half the beef sold in Australia now comes from Halal-certified suppliers. Most dairy products as well as other food and many non-food items are certified to sharia standards, but not always labelled.

Islamic organizations have estimated the value of the global halal certification market at USD 2.3 trillion in 2013, growing by 20% per year. No other religious group has imposed a similar tax-like scheme on the general public.

Investigative researchers in France, Canada and the USA have found links between halal certifying organisations and shop fronts for terrorist groups like Hamas and the Muslim Brotherhood. Similar research in Australia is yet to be undertaken.

Grand Mufti Dr Mustafa Ceric has suggested at an international conference in 2010, that Islam can conquer the world through the Halal (certification) movement.

1. Apply the 'User Pays' principle
If observant Muslims insist on special rituals and halal certification for their food, then Islamic community organisations should provide these services and cover the fees and extra expenses for the suppliers. Religion is always a contentious issue and should never be imposed onto others.

* Nowhere in Islamic scripture does it say Muslims should eat only halal-certified food. Most observant Muslims know perfectly well that nearly all our food is by default halal:

Koran Sura 2:173 (Al-Baqarah) reads: "He hath forbidden you only carrion, and blood, and swine flesh, and that which hath been immolated to any other than God. But he who is driven by necessity, neither craving nor transgressing, it is no sin for him. Lo! God is Forgiving, Merciful."

Koran Sura 5.5 (Al Ma'idah) prescribes: "The food of the People of the Book (that is Jewish and Christian people) is lawful unto you and yours is lawful unto them."

Action Points:
Watch our halal certification information video. Share it with your family and connections.

Read, download and distribute our Q on: Halal Food and Halal Certification paper and our petition form from our website qsociety dot org dot au

Pick up a stack of our "Why Swallow This?" fliers at the next Q meeting and do an hour of letter boxing each week in your neighbourhood.

Talk and write to your local state and federal MP and Senators. Ask them to consider our three policy proposals

When shopping ask for non-halal certified options. You are not a bad person if you do not want to support Islamic organisations with your shopping dollar.
Islam=LEVENSBEDREIGEND 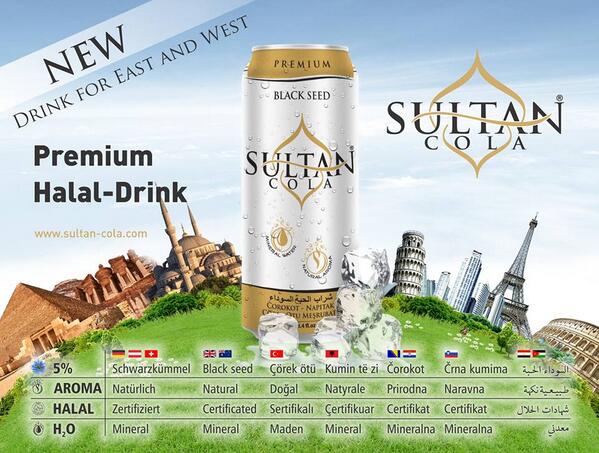 Halal drink alleged to support jihad financing
Profits from the sale of halal-drinks are being used by radical Islamists to support propaganda campaigns to promote Jihad, it has been claimed.

The accusations were made in an article in German weekly ‘Spiegel’, which writes that radical Islamists use the profit of selling drinks made by Austrian-Bosnian company 'Sultan Drinks' to finance propaganda.

Sultan Drinks, a halal drinks manufacturer based in the Austrian capital of Vienna, sells halal cola and energy drinks in neatly designed cans in 23 countries. They even export their drinks to Israel.
While the company seems liberal and open, this does not seem to be the case for many of the dealers of their drinks.

The company 'Triple Port Ltd.' is one of the companies that sells the drinks. One of their contact people is Karim L. He was the speaker of the Muslim Council in the German city of Bonn who had to resign after it became clear he had raised funds for a Salafist organisation.
The Spiegel article alleges the profits from the halal drinks were distributed via numerous schemes, from sales companies to controversial Quran distribution campaigns in Germany and Austria. One Quran distribution campaign in Vienna was banned after it was revealed a jailed terrorist was one of the original organisers, but has since restarted.

Sultan Drinks denies all allegations made in the German magazine. Mirzet Spahic, the boss of the drinks manufacturer, says his company does not finance Islamists.

He said: "We ourselves are victims of Islamists as we come from Bosnia. My friends and I are all children of the war in Bosnia. We cannot know who is selling our drinks somewhere. This is a catastrophe for us."