the Calais Mayor Natacha Bouchart who claimed the UK's "generous" refugees benefits were to blame for the camps in her town.

French cops to bulldoze Calais migrant camps
Social workers were outraged on Thursday following an announcement from the top police authority in Calais, in northern France, several migrant camps would be cleared from the town’s port by “next week”.[...]
The problem has only gotten worse as the instability in Egypt and the war in Syria have fatten the ranks of migrants waiting to clandestinely climb aboard a lorry or train in Calais. The “Syrian camp” and “African camp” are among those slated for destruction by police in Calais.

Clawing his way over a 12ft razor-wire fence, an immigrant camped on Britain’s doorstep makes a desperate bid for a new life, reports the Sunday People in Calais.

The Yemeni is among more than 500 refugees from war-torn nations holed up in the French port of Calais where they hope to sneak on to trucks ferried 23 times a day to Dover.

Before hurtling over the fence, the Arab unzips his anorak and tracksuit top to display deep cuts across his chest which he says were inflicted by police in Saudi Arabia.

He believes the only place he will be safe is Britain.

So he braves the razor-wire, landing with a bump, then scuttles towards a lorry park in hope of clinging to the axle of a truck heading to the UK.

“This place is terrible,” he exclaimed when the Sunday People visited a new migrants’ camp this week.

Jabbing his fingers towards the sea, he insisted: “I must go to England.”

The fence he scaled is just yards from the growing migrants’ campsite which has raised fears of a new Sangatte – the Calais asylum seekers’ refuge which sparked a massive British immigration crisis before its closure 12 years ago.

At its height as many as 2,000 immigrants were in the Red Cross centre yards from the Channel Tunnel.

After its closure, following a deal with the French government which saw Britain accept hundreds of migrants , the number gathered in Calais on a typical day fell to just 100 by 2012.

But two years on – with the new camp and several sister sites expanding – the number has risen five-fold.

And waiting on the North African coast to sail to the EU are half a million more desperate migrants – of whom 100,000 will try to get to Britain via Calais.

This week we counted 135 makeshift tents at the main camp beside a disused railway line just feet from the port perimeter. Britain is 20 miles away.

Most tents are occupied by two or more people and there are a further 35 makeshift homes at a nearby riverside.

In the shadow of P&O ferries carrying British daytrippers, the would-be migrants huddle each night around campfires before trying to climb aboard a lorry.

Five people have died in the past two months trying to reach Britain via this route.

But it appears the French authorities are doing nothing to clamp down on the camp.

Police sit in patrol cars next to the camps but we did not see a single officer try an ID check on the occupiers, dubbed the “sans papiers” or “no papers”.

Calais authorities insist the British and French governments need to hand over more money and resources to curb the problem.

This week when we were given a tour of the camp, one of its youngest residents told us how he had travelled 7,000 miles from Afghanistan in the hope of getting to England.

But Kahn Abid, 18, was shocked at conditions in the camp.

He said: “I have only been here for five days but it is awful. We shouldn’t have to live like this.

“I am desperate to move to England, I will do anything. England is the best country in Europe – there is nowhere else like it.

"You can get a job and live in peace.

“Life in Afghanistan is very hard. All I want to do is get to the UK. I don’t care how.


"Every day people try to get on the trucks, hiding in the axle or inside. People are desperate.”

Pointing to rows of crudely fashioned tents, some little more than a wooden pallet with a bin liner as a substitute for canvas, Kahn said: “Who would want to live like this?”

The camp is littered with rubbish and the smell of human waste hangs thick in the air.

The hundreds who call it home share three portaloos left at the site by local authorities but the door to one has been torn off.

There have been no showers since a toilet block was torched so the men wash themselves with bottles filled from a tap in a nearby disused boatyard.

A barbed-wire fence doubles as a washing line, with Kappa tracksuit bottoms being dried when we visited.

At 6pm each day volunteers from local charities arrive amid the squalor to serve pasta, rice and vegetables donated by supermarkets.

Camper Mahade Katab, 28, told us: “I have seen men fighting each other for food. Sometimes they just fight out of boredom.

Mahade headed for Calais after his mum, dad and two brothers were killed in Syria’s civil war.

He shares his tent with two Syrian friends. All dream of making it safely to England.

Crouched inside, he said: “I’ve lost my family, I’ve lost everything. Back home there is nothing for me. My family is over.

“But his camp is horrible, it’s s***. The French government treat us worse than animals.

“Everyone only has one goal – to get to England. People always talk about it. Everyone knows it is a great place.

"The best place to live.”

Huddled in the doorway of a derelict building, we found Eritrean mum Tsega clutching her four-year-old son.

She is one of the few women to brave life in the Calais camps.

Clutching her soup-kitchen dinner – a polystyrene box of vegetable pasta, a slice of white bread and a banana – she looks close to tears when asked how it feels to live among the migrants hoping to reach Britain.

In broken English she told us: “I have been here for five months. It is a horrible situation.”

Tsega’s son licked the last of the watery pasta sauce from his plastic fork and looks up hopefully at his mother as she adds: “We just want to go to England. We can’t stay here.”

She is one of hundreds who queue each night for food in a disused boatyard across the road from the camp.

Every day at 6pm a metal gate to the yard is opened by volunteers from the charity SALAM, who dish up meals from a van.

The hungriest refugees sprint 250 yards to be first in the queue. Some sneak back for seconds, pulling up their hoods to disguise themselves.

One man in the queue told us: “We should not have to live like this. But if it wasn’t for these people we would have no food at all.

“We get one hot meal per day, that’s it. The rest of the time we have only water.”

After dinner another Afghan immigrant , Rihan Kahn, 23, told us how he was hoping for a second chance at life in the UK.

He sought asylum in 2007 and landed a job on the black market working in a pizza takeaway in Sheffield.

He earned £30 a day and shared a house with fellow migrants for £400 per month.

But he was caught and deported although that has not put him off taking the chance again.

He said: “It was so much better in England. I loved it.

“Sheffield is a nice quiet place. There is no war. I had a job on the black market – this is normal.

"If people in England don’t want to work then why shouldn’t I do their job? We are grateful for the money.”

“But Calais is the absolute worst. This camp is a dump, it shouldn’t be allowed. No one wants to stay here.

“I have never seen people living like this before – it’s terrible.”

The deputy mayor of Calais last week responded to criticism of the growing number of migrants by calling for more police and extra resources from the French government and from Britain.

The Public and Commercial Services Union, which represents hundreds of customs workers in the UK Border Agency, said: “It is a tragedy that people are putting their lives at risk to enter the country.

“Instead of vilifying them and other migrants, we need a proper debate about immigration to discuss the full economic and social effects and the proper resources needed for UKBA.”

But Kahn Abid, 18, was shocked at conditions in the camp.
He said: “I have only been here for five days but it is awful. We shouldn’t have to live like this.

The growing crisis in Calais, which has seen thousands of migrants descend on the port, has forced local authorities to draft in more riot police.

The prefect of the Pas-de-Calais region Denis Robin told media on Monday, that 40 more riot police are being stationed around the port to try and boost security.[...]
But in recent months the numbers amassing in the town have swelled, leading to local authorities to take severe action.[...]
The prefecture Robin clearly believes more help is needed.[...]
Robin says the migrants were acting in groups by gathering on the roads leading to the port in large numbers to try “to saturate the security arrangements put in place”.
The prefect said the situation was becoming dangerous for the migrants themselves, 13 of whom were left injured after a mass brawl between various groups at the weekend. 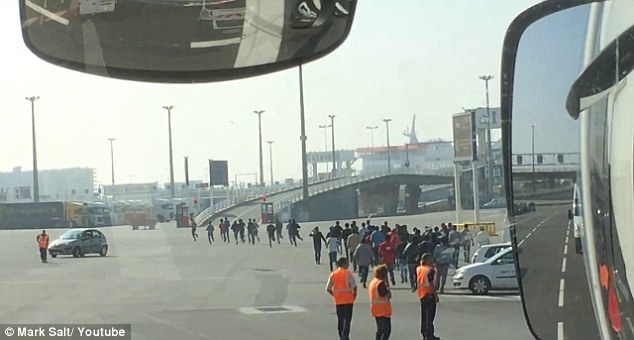 Michelin chef and curried turkey; Inside the 'new Sangatte' which cost £2.3million and is partly funded by the British taxpayer

A 23-year-old Afghan called Raja said: ‘The facilities are much better here than anything we’d had before. The food is also much better too.

‘I’m really pleased that they have lots of power sockets as I like to speak to my friends in England on the phone and over Facebook.